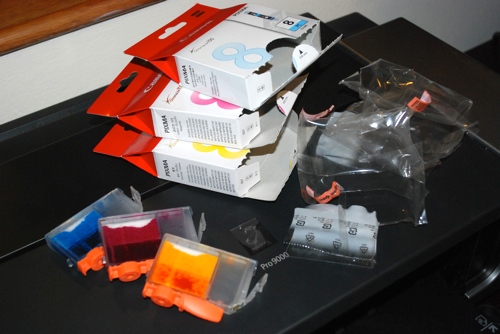 Because then the ink would spill everywhere I suppose.

As I was walking through Officeworks this afternoon trying to ascertain if they sold waffle irons with phones attached, it suddenly struck me that the free and open source community are missing out on something huge. Or I'm missing out on their discussion on this huge thing. I could have phrased that better.

While I tend to life a third of my life in the super evil Apple world where Steve Jobs dictates to me what applications I can run in my Terminal and which exact machine I can buy, the other two thirds are spent in FreeBSD and my current Linux distribution of choice because FreeBSD just doesn't work on my ThinkPad "netbook" that well. Funny thing is, both Fedora and Debian refuse to suspend properly on it, but Gentoo derived distributions work flawlessly. Go figure.

In the case of FreeBSD and Linux, I can deeply respect the enormous effort and perseverance of advocates for open s/standards/drivers/. Closed binary blob drivers will probably be a fact of life for all of us for the foreseeable future, but the situation is certainly better than what it was a decade ago ago when I was in early high school and couldn't even use my crappy Winmodem in my Red Hat Linux partition, much to the delight of my computer teacher who was a Redmondite. Our school had a perfectly serviceable Notes installation, and instead of moving off it to something simpler, more affordable, more open and ultimately more secure, they became an Exchange shop. Well not a shop, a school. But the school did sell uniforms and books, which I suppose also made them a shop.

Getting back on topic, we have people who refuse to back down on their convictions for this general trend away from binary blob nonsense, even if I tend to think of myself as more of a pragmatist than an idealist.

Where was I going with this?

Oh yeah I remember now. Whether it comes to standards for office documents, communications or for graphics drivers, open is better and we all benefit, even us using super evil operating systems like Mac OS X.

However, there's still one area that is in desperate need for standardisation, and it has to do with jaffle irons. I should be able to put a standard piece of bread, a slice of cheese, a few pieces of onion and a ridiculous amount of avocado into any jaffle iron and have it make me a gosh darn jaffle! Who's with me? Yui totally is :). 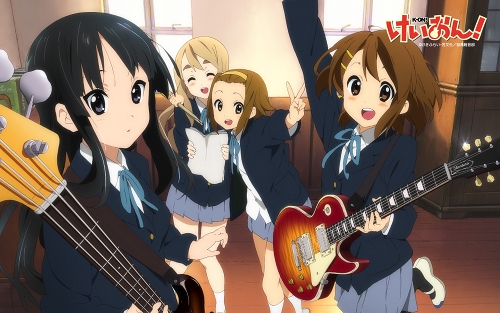 The other thing is printer cartridges.

The other thing is printer cartridges. Yes I just said that, I wanted you to feel the full impact of this mofo of a statement. Yes, I said mofo. Apparently its a term cool people use, like The Game and Converse Shoes and Box Socials with their loud music and their wild hair and pocket octopuses. High five Larson :).

CUPS (developed in part by that super evil closed Apple Inc… hey, that's a pun) and other open printing systems have allowed free and open source access to printers without using closed, universally terrible software that printer manufacturers otherwise force upon hapless Windows and Mac users. That's great for controlling these ink to paper dispensing devices, but what about the ink itself?

RANDOM THOUGHT: With the exception of Apple and precious others, why do hardware makers always make terrible software!? Even Logitech which otherwise makes beautiful hardware that's fun to use can't make a .PreferecePane that doesn't crash on me or look like it was designed by Newt Gingrich. I have no idea why I said that guy's name, for some reason it was just the first one that came to mind. Like A Boss.

Every manufacturer has their own ink dispensing and delivery systems, their own little cartridges to store their precious fluids or toner powders, their own colour spaces, their own everything. Even different printers made by the same companies will have wildly different little tanks of the stuff. Photo cyan AND cyan? Really?!

Printers are the gateway drug, the one the dealers at HP Sauce, Lexfark, EPSOM SALTS and Canonball let you shoot up with at a very reasonable prices, so then later you come crawling back for inks that gram for gram are more expensive than saffron or palladium, and glorified paper with gloss on it that costs more per surface area of paper than the paper money you part with in order to possess it. The printers aren't the things making these companies money, its the ink and its the toner and its the paper and its the drugs, foo.

RANDOM THOUGHT: Isn't saffron spelt with only one F? The spell checker told me otherwise, but it doesn't look right. My spelling sucks.

Much like when people claim Google is an "open company" when their primary cash cow algorithm is the most closed, guarded secret since 11 secret herbs and spices, printer companies will not surrender to a standardised method of packaging and utilising ink. It's a fact of life, and frankly now I'm depressed imagining a world with such standardised ink vessels, because I know it won't happen.

I wonder if Mr Stallman or De Raadt have an opinion on this? They'd probably refuse to use such things outright. Torvalds and McKusick and Watson probably have no problems using them because a free version isn't available… and they want to be able to print things!

Have they standardised on those printer ribbon things from dot matrix printers? When I was growing up we had an EPSOM SALTS dot matrix printer and it made really cool sounds. Before I started school I used to draw obscure pictures in KID PIX and get it to print just to see if I could make it play a tune, then refine the picture.

Turns out people had already done that, but I thought I was being super badarse at the time. Perhaps it explains much of my social awkwardness. No Laura I can't go to your birthday party, I'm making music with a dot matrix printer. Stupid nerdy childhood.