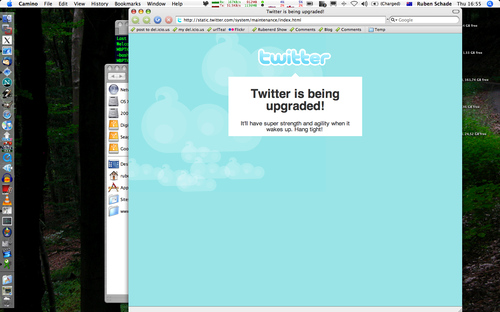 Screenshot is from my MacBook Pro taken on the 06th of September 2007. Yup, I was still running Mac OS X Tiger!

Cross pollination is a good thing. If you don't think it's a good thing then you're against flowers. You're not… against flowers are you? More to the point, that evil twisted genius Zombie Skittles has used two blog posts here recently as the basis for his own (Do You Have Flybuys? referencing Okay Woolies, you win and Funfact Bombshell referencing Rubenerd Fun Fact #80), so it seems only fitting for me to do the same with one of his.

For my derivative work I've elected his post titled On This Day in which he describes the following:

I have decided to come clean and admit to you all that on this day four years ago I entered a convenience store with a poster tube painted to look like a bazooka and demanded they hand over all their issues of Better Homes and Gardens otherwise I’d blow away their frozen food section. The owner called my bluff and had me placed under citizens arrest for making a mockery of World War II artillery by the Adelaide Historical Society of Southern Sri Lanka. True story.

Underneath this baffling admission he listed a series of things which he believed happened On This Day, which is clever because that premise also happened to be the title of his blog post. I've decided to blatantly copy him, by listing what happened on my blog On This Day being the 06th of September, and what happened around the world.

On this day on my blog

On this day around the world