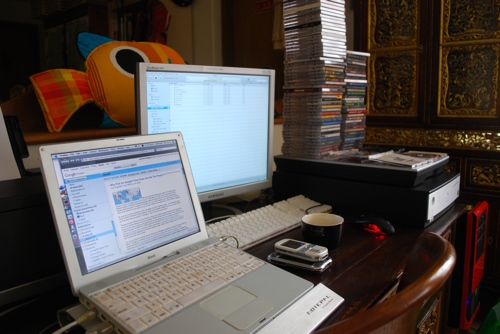 Ripping CDs while reading my iBook to maintain my sanity!

As I've mentioned previously, one of the Christmas presents I gave to my dad recently was a pledge to rip every single music CD we own before I head back to Adelaide to resume studying and whatnot. To put it into perspective, I've ripped 1419.1 days of music so far according to iTunes and we think we're about half way. Whew!

One of the things I've been doing to maintain my sanity while I rip these CDs on our DIY desktop downstairs here has been reading up on Google Reader, doing some fun Ruby programming and reading emails from my webhost explaining why they were unaware their pants were on fire. Because my MacBook Pro is upstairs in my room plugged into four external hard drives, an external monitor and various other riff raffy nonsense, I thought I'd save myself the trouble of dismoutning and unplugging each of said devices and just bring my little 2002-vintage iBook G3 downstairs with me.

What I've found interesting is that, for the tasks I described about, this 800MHz G3 PowerPC iBook with Mac OS X 10.4 Tiger (the previous release for you non-Mac heads) has been more than capable. Sure it's a heck of a lot slower opening applications than the MacBook Pro, and it's 640MiB (128MiB + 512MiB) of memory means I can't have too many applications open at once, but if you adjust your workflow accordingly and don't open nine thousand tabs in Firefox, it's perfectly fine. The only addition I've made to this machine in the last few years was an aluminium Cooler Master NotePal active cooling pad with fans which makes this otherwise toasty machine just mildy warm.

Where am I going with this? Well if you'd let me finish instead of interrupting me with questions I'd be able to answer. What this experience has taught me is that just because a computer is old, doesn't mean it's not useful. 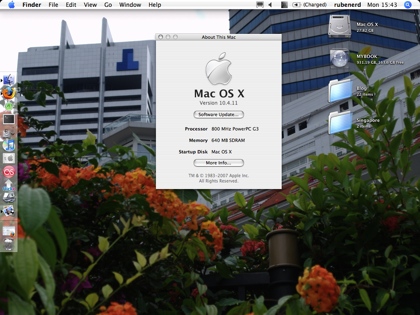 Our family has never thrown away a computer, much to the contention of my late mum when she was still around and shaking her head at the mountians of computer equipment in my room! Every machine still has a useful purpose; if they don't have network cards I buy one, hook them up to our messy cable router network and get them working either on compiling huge packages like KDE for FreeBSD, or working on medical research with the Folding@Home project, etc and so forth.

This experience with this iBook though has taught me that older computers aren't just useful for running as headless (aka without a monitor) drones that process input and that's it, but they can also be used productively to write blog posts, check email and so forth as I've been doing here. It seems obvious, but it's taken a personal expeirence to really realise it.

I guess using the tiny Armada M300 hand-me-down from my dad's office as a netbook is another example of this. FreeBSD on that svelte lighter-than-a-MacBook-Air laptop with Xfce makes a very usable machine, provided you don't do any video editing! 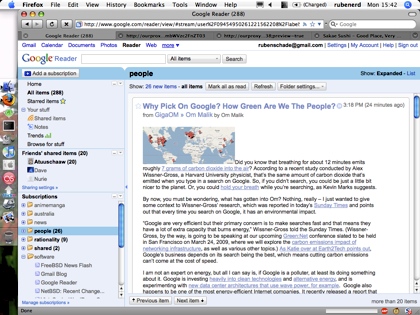 Curiously the only thing this iBook G3 hasn't been able to do that I thought it could was watch YouTube videos. In my previous post about the Israel Gaza conflict, I was able to listen to the video but couldn't watch it because it would skip every second frame. I seem to remember this machine had no trouble viewing DVDs or older MPEG2 compressed video, but later MPEG4 or DivX videos were too heavy. Perhaps it takes more effort to decompress and view such material? I'm not sure, I don't pretend to be a video expert.

In fact, I took this iBook to my first real job after high school back in 2005 before I started university too. I learned Perl on this machine. I learned a lot of Unix commands playing around in the Terminal on this machine. Good times. Funny how it was when I upgraded to a MacBook Pro that my family and our lives in general started going downhill… the "Schade Family Recession" as it were. Perhaps I'm onto something here.