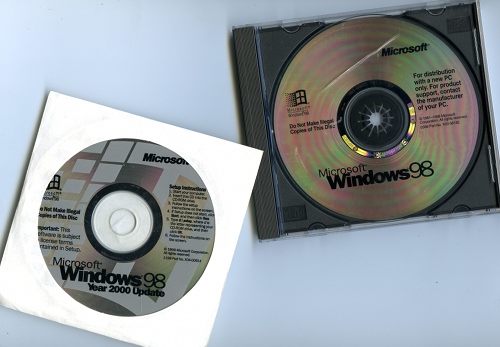 "History" is six letters off being "hysterical"

So having been a computer nerd since before I started school or could talk, I've had my fair share of electronic gadgets and whatnot. Couple that with the fact I'm a bit of a hoarder, and I've ended up with more electronic crap than a dump truck outside a Best Denki. Think store rooms. Think full cupboards. Some of my friends had lads mags in boxes under their bed growing up, I had boxes of disks and ISA or PCI cards. Oh yeah and Magic and Pokémon cards. Conclude from that what you will.

With our latest move the cold reality set in that we can't afford to maintain all the stuff we have, so my dad, sister and I set out on an ambitions plan to get rid of most of it. As a result, I've been making some painful (for me!) decisions about some computer crap, and finally deciding to get rid of anything I don't need. Well okay, most of it that I don't need ;).

Think bags of parallel port printer cables. Think dead SCSI flatbed scanners. Think 14.1 inch CRTs that never used to sound that impressive to me because as a little kid I thought an inch was the same as a centimetre. Was I in for several rude shocks.

Anyway recycling is one of the few things Singapore really needs some serious work developing, but fortunately we were able to find a computer and electronics recycling centre in a warehouse district not too far out from the city. Well okay by world standards nothing is too far from the city because any further than a dozen or so kilometres from where you are in any direction is either ocean or Malaysia. You get my point.

While leaving a practical treasure trove of useless crap at said computer recycling depo this evening, the lift opened to a scene reminiscent of a treasure hunt. From the lift door leading to the warehouse was a line of discarded Windows 98 CD-ROMs glinting in the artificial light of several high intensity halogen lamp things. I'm not talking five or ten, I'm talking at least a hundred or so of these genuine discs strewn all over the floor in a rough line. Someone must have dumped a heck of a lot of old Windows machines from 1998!

Most of the discs or their cases were cracked or smashed to bits, but after we left our stuff my dad and I found two discs that were still in surprisingly good condition on the road outside, even if their cases were a bit worse for wear. They were a genuine copy of Windows 98, and the Windows 98 Year 2000 Update!

Don't get me wrong, Windows 98 was a godawful operating system (it came with DOS like Windows 95 so yes, it may as well have been an OS) but I used it for many years and retro is retro, right!?