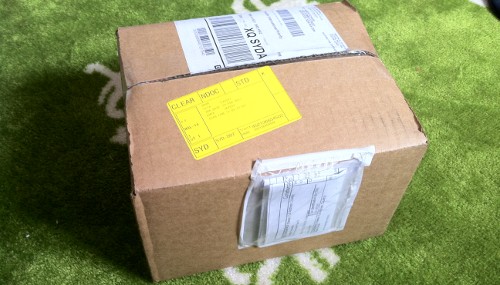 I got an unexpected package in the mail today!
<!–more–>

A week ago I was on the phone to a friend of mine in America lamenting Keith Olbermann's recent suspicious and secretive dismissal after NBC was bought by Comcast.

Olbermann was a news anchor for MSNBC who I thought composed excellent news dialogue, delivered it in his fast pace, no nonsense style and had wit as sharp as a tack. As someone wary of TV news I found myself disagreeing with him at times and I still did my own research, but I also found him to be a breath of fresh air and a valuable counterforce to "certain" loud Fox News presenters. Bill O'Beck, I think that's his name.

As well as his role as a general news commentator for breaking stories, he hosted MSNBC's highest rated show Countdown which discussed five news stories of the day interspersed with readings of Thurber, odd news in the Oddball segment and his infamous Worst Persons in The World which got him into trouble with Jon Stewart of all people, though Bill Maher was quick to show his support. Ah politics ;).

I bought my second pair of glasses to match his. I emailed him a couple of times with opinions on news stories and even got a reply once! But I digress.

What I appreciated as someone without access to their channel is that unlike many other media companies, MSNBC made Countdown available in its entirety as a podcast. Generally speaking networks prefer cutting up shows into smaller segments and releasing them, I suppose to make watching it on TV with advertisements more appealing or to reduce load on their servers.

Despite living overseas, I was able to download and watch his show for three years to get a glimpse into what was going on with my American friends.

I first talked about this in October 2009: Keith Olbermann's Countdown as a podcast.

I belabour all of this to say that after hanging up with this friend in the US, without telling me he went on the NBC Universal internet store and ordered me some memorabillia that I talked about here back in 2009: A Keith Olbermann Bobblehead! Presumably now the show is toast, NBC won't be selling these for much longer, so now I have a piece of history along with all the gigabytes of podcast episodes I've downloaded over the years.

He stands about 20 centimetres tall – well actually he's sitting, at his smart desk thingy – which places him in a similar scale to many of my anime figures, though obviously much larger than my Singapore Airlines A380! 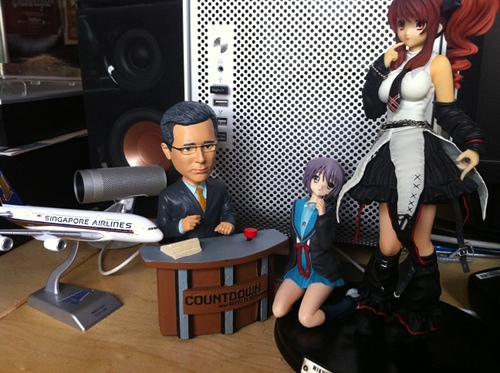 I wish I could use your name!

As this friend of mine has done in the past when he bought me 100 pixels on the Million Dollar Homepage and paid for my hosting fees for the whole of 2008, he insisted I not divulge his name on my site if I discussed it. He even paid a small mint to have it shipped FedEx Priority which meant it arrived in three days! Amazing!

He's truly one of the nicest, most humble people I know and I really value his friendship. If you're reading this good sir, thank you so much! I hope one day you'll let me talk about you here, though I understand your personal reasons why I probably won't be able to. Frustrating, but understandable! Thank you again manhug

Like Countdown, I wanted five separate headings for this post, but I ran out after four so here's another one. I'll end by quoting some Thurber as Keith used to do:

It is better to know some of the questions than all of the answers.