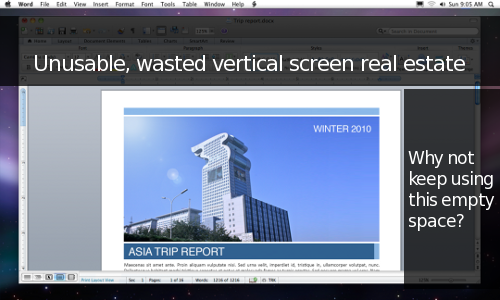 Hot off the heels (relatively speaking) of their ribbon interface-clad Office 2007 Microsoft's Mac division has announced their next version of Office for Mac that will also include the ribbon interface. Problem is, both Microsoft and Apple already solved the problem of feature accessibility years ago with the tall toolbox and the ribbon is a giant step backwards, especially now with widescreens so prevalent.

Some personal history nobody cares about

Its hard for me to admit this, but when I first moved over to the Mac from Windows in high school I loaded up Office for Mac on it to take to classes because at the time NeoOfficeJ was still rough around the edges and I already had lots of Office documents. I was surprised that their Mac version was in many ways better than the PC suite: the interface was much cleaner and it seemed more responsive. I wans't alone in thinking Microsoft's best product wasn't even on Windows.

Time went by and gradually Microsoft released Office 2004 then 2008. It was as if Microsoft management had cottoned on to the fact their flagship software suite was running better and was more elegant on a competing platform, because each subsequent version got progressively slower (the understatement of the century) and the interface more cluttered.

By the time I left high school I started using OpenOffice and with the 3.x series I feel as though I have a solid replacement that supported open standards (sorry folks, I don't consider OOXML such a standard). I also started using Gnumeric which was one of the best free/open source applications I've ever used before and since. 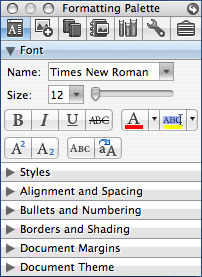 The ribbon was outdated before it even existed

The first exposure I got to the Office 2007 ribbon was at university when the computers started being upgraded. I kept hearing the arguments that the ribbon would make it easier to discover features than menus, and that if I didn't like the fact it took up half my screen I could simply collapse it, but I was unconvinced.

The concept of a ribbon interface seems like an idea for computers built ten years ago. Virtually all new machines use widescreen displays now, which means this huge thick slab takes up even more space. The elegant Office for Mac and iWork solution that Paul Thurott so despises of having a collapsible, free floating window pallet is far more practical for widescreens because it scarifies no precious vertical screen real estate.

Fortunately, as with Chrome/Chromium's Mac versions, being a Mac application it means it will retain a menubar for the sake of our collective sanity. I also hope they'll have the option of deleting the silly ribbon entirely and using a floating pallet again.

My number one feature request

As I said I've since moved to iWork, OpenOffice and Gnumeric, but I would hope for the sake of people who do have to use this latest version of Office they work really, really hard at improving performance. The fact a PowerPC version of their suite running in Rosetta on an Intel platform runs faster than a later Intel native version speaks volumes.