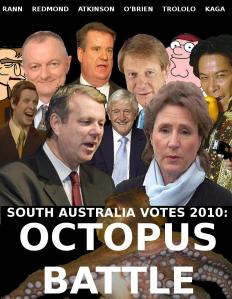 I bow to the awesomeness of Edible_Hat!

Contained within my [uncharacteristically] serious post about the South Aussie elections yesterday I hinted that I'd be discussing #octopusbattle today. Edible_hat beat me to it by creating an epic work of art and accompanying notes, so in the spirit of not reinventing the wheel I will simply refer you to his post on the matter!

[…] and as Chairman Kaga was laughing a gigantic octopus launched itself at the politicians, sending them into a mad panic. Mike Rann was able to dodge the kerfuffle, leading many to believe he was worthy of a second term, but only just. I am Edible_Hat, hear me roar! Do Octopuses roar? I know raw means it’s sushi. Monnie was supposed to make me cupcakes today, but she gave them all to her roommates and Ruben instead, grrrr. At least I can make better scarfs than Ruben, mua har har!