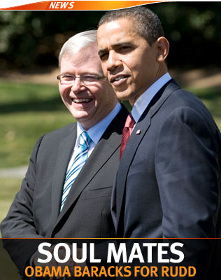 It seems as though Kevin Rudd and Barack Obama finally have something they disagree on: the US government has expressed concern over Senator Stephen Conroy's plan for a mandatory internet filter. Guess that old headline above somehow isn't as true anymore :P.

According to The Punch:

US State Department spokesman Noel Clay said: “The US and Australia are close partners on issues related to cyber matters generally, including national security and economic issues.

“We do not discuss the details of specific diplomatic exchanges, but can say that in the context of that ongoing relationship, we have raised our concerns on this matter with Australian officials.”

It's been ages since I've posted something on Slashdot but I put in my $0.01. It would have been two cents, but the other cent was used to pay taxes to fund some massively expensive filter thing.

This news isn’t on the scale of Google redirecting mainland Chinese search results to Google.cn but has more in common than Senator Conroy here in Australia would like people to think. Wait, no, that isn’t even right, he’s openly compared the proposed Great Firewall of Australia to the filters in China.

When Prime Minister Kevin Rudd and Federal Labor won the last election and Barack Obama and the Democrats won the elections in the US, Australian newspapers reported their first meetings as being one with kindred spirits, in much of the same way as George Bush and John Howard. This filter is perhaps the first large(ish) crack in this relationship, and I’m really hoping the Americans kick up as much of a fuss about Australia’s laws as China’s if the filter in Australia goes through.

The problem for the voting public here is in our version of the two party system, the opposition are considered the more conservative party, and its new Christian far-right leader Tony Abbott has been fairly silent on the whole issue. One can imagine he supports it in spirit but doesn’t want to seem as though he’s agreeing with Labor. Either way, we’re royally stuffed.

In the meantime if you’re an Aussie, don’t forget the Electronic Frontiers Australia is accepting donations for their Open Internet campaign.

As is typical of someone with my writing style, I could probably have written that entire posting in a few lines. Verbosity and I get along really well, she's like a really dorky girl with huge glasses that hangs out with me and strings together huge paragraphs of words for fun on lazy autumn evenings :).

Did that trip a filter? Anyone? If you can't read this sentence, let me know.