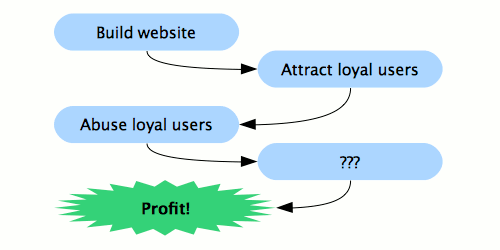 There have been so many comments in both my Google Reader and Bloglines accounts about the problems with dodgy Facebook applications taking photos of your friends and deceptively using them in advertisements targeted at you as well as Facebook publishing things it's not supposed to I was all ready to write my own response in them both… when I remembered I had a blog for that kind of thing. I used to write longer things here at one point, uncanny.

I think the problems with so many of these flare-ups online can be traced to one flawed assumption, that privacy exists online. I'm guilty of having these thoughts too. Once you remove the assumption, it's surprising how trivial so many of these online problems seem. It's cliche, but Steve Rambam said it best when he decried that "privacy is dead, get over it!";. I've yet to see a convincing rebuttal of this.

These problems existed before Facebook (and Orkut, Twitter, MySpace, Friendster…) and they'll still be with is for the foreseeable future despite some mantras. If we all just assume there's no privacy and conduct our online lives accordingly, we'll be in a better position.

What is it they say? The power of accurate observation is often called pessimism by those who don’t posses it? Or is that cynicism?

Any gains made in privacy should be viewed in this context. Plus then it makes genuinely honest sites like Whole Wheat Radio that buck the trend that much more of a surprise and a joy to use as a result :).

In an ironic twist for my Singaporean readers, the WordPress post ID for this entry is 4888. Seems the 4 in that number is enough to offset even three 8s!