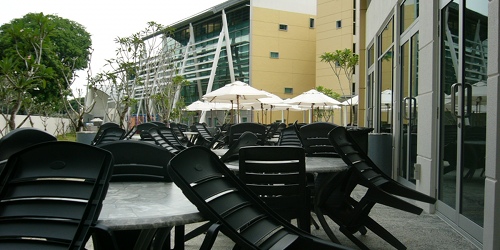 Hall and Oates famously sang there's life after high school, and I think it's safe to say there are several signs that let you know such sentiment is true. One is you graduate, two is some of your former teachers open a chain of budget laundromats that cater to people allergic to surfactants, and third is people you grew up with get married. Well, two out of three ain't bad!

It may come as a complete shock to many of you here (ha!) that I was a fairly reserved and paranoid kid in school. Most of my life until that point was spent looking after my mum and worrying about whether she'd still be alive in the morning and when I got home, so I wasn't terribly fun to be around. My sister and I coped in different ways, my solution was to keep to myself. I think most people tended to ignore me because it was easier, which looking back now I can understand!

The emergency exits are located…

There were a small handful of people who literally made it possible for me to get through high school, one of whom was Laura Douglass. Of all the kids at that private school who grew up getting what they wanted and not being used to being humble, she was one of the few who was a genuinely nice person. I know, I'm shocked too! When she asked how you were feeling if you looked blue you knew she actually cared about what your answer was. She was ridiculously friendly, smart, optimistic, had a wicked sense of humour (and a laugh to match!), she could play the accordion, and was a better school councillor than… well, the school councillor. Despite us having virtually no interests or anything else in common other than an obsession with silly comedy shows, I was privileged enough to have her as one of my best friends.

I can't describe it, but it was like she had this positive energy that so many other people at that school either didn't have or actively seeked to destroy to make their own shallow existences less meaningless… you know the types. Everybody knew there wasn't any point belittling Laura or people she was friends with because it would wash right over her, turn around and hit them back again!

Is there a point to any of this?

Anyway I belabour all of this mumbling, poorly worded and insufficient for what is deserved description of Laura because I got an email from her a few days ago saying she finally got married to a strapping young chap called Sir Methodist, sorry Methorst, whom I only hope has enough energy and friendly awesomeness to keep up with her!

In case she reads any of my silly little blog here I wanted to publicly wish her all the best and to say Sir Methorst is a lucky guy. I'm glad that of all the people who I knew at that school you were one of the lucky few who managed to find happiness. Heck, you're one of the few who deserved to :).

As I have started signing all my posts, emails and other electronic whatnot of late:
Peace, health and happiness :)
~ Love Ruben

With reference to life after high school, this makes me think I need to pull my own life out of this wild plummeting tailspin its currently in and start flying up again. Which may be a problem because I don't even have a driver's licence yet, let alone an aviators licence. Uh oh, I'm going to get poked fun at for that again!