I used CompactFlash cards in my Pentium 1 tower in lieu of spinning hard drives. CF cards implement ATA/IDE, so all you need is a passive adaptor. I had two SanDisk Ultra 16 GiB cards from an old digital camera that worked a treat.

CF cards don’t posess that nostalgic clattering sound of mechanical hard drives, and chipset throughput limitations likey mean they generally don’t perform much better either. But they’re much easier to source, don’t draw anywhere near as much power, take up less space in cluttered cases, and in a pinch can be unplugged and easily connected to a card reader on another machine to transfer files. 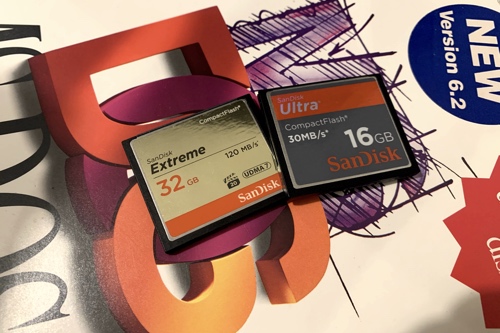 They’ve worked so well for me so far, that I decided to upgrade one of the 16 GiB cards to a brand new 32 GiB SanDisk Extreme. It claimed to have a 140 MB/s sustained write speed compared to the 16 GiB card’s 30 MB/s. Again, not a big deal considering it’d still bottleneck on the VIA chipset. At the very least I expected a slight performance improvement along with more space.

The exact opposite happened! This card has been glacially slow. PartitionMagic took more than 45 minutes to move a 24 GiB partition. Installation of Windows NT 4.0 Workstation took longer than the time Clara and I went out for dinner, and 95 didn’t fare much better. The installers for BeOS 5 and NetBSD 8.1 never finished loading before I gave up, and OS/2 4.5 Warp didn’t want to boot at all.

So what went wrong? Either I got a dodgy card, which I can’t discount because I don’t have a similar card to test. Or there’s a protocol mismatch. Maybe UDMA7 isn’t as backwards compatible as UDMA1 on the 4 GiB card, and the VIA chipset invoked a fallback. I’m not well versed in the IDE protocol standards, but is such a thing possible?

I didn’t think to run any benchmarks, because I was too busy putting the old card back in so I could boot and read Encarta 95 again :). My subjective view of the card’s performance might not be as stark as what raw numbers suggest; I’ll leave the card out for now in case I want to do a more quantitative comparison at some point.