A few friends of mine have commented on my site redesign. Yes, after eight years using WordPress, I finally migrated over to Jekyll, and it feels great!

It’s not you WordPress, its me

I first moved to WordPress in 2006. I’d just migrated from a crappy Perl CGI script I wrote over to RapidWeaver, but wasn’t finding it a particularly good fit. I was confused by Radio Userland, Movable Type seemed to have scared people away with its revised licencing, so WordPress it was.

Leaving aside its widely known security bugs (which bit me on a few occasions), WordPress 1.x was a pleasure to use. It wasn’t demanding on my crappy webhosting package, its tabbed admin UI was simple. Sure it had some missing features, but these could easily be added with extensions. 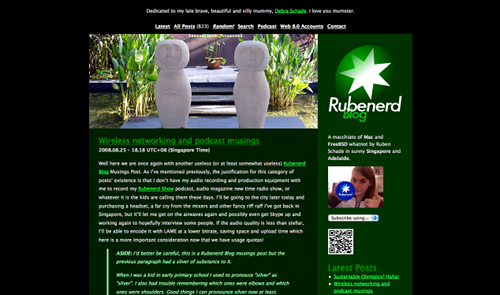 As the WordPress team began to get more serious about security however, as early as 2011 I felt as though feature creep was setting in. Delta updates were introduced to make these updates easier to perform, which was a good thing given all these new things which I didn’t otherwise need or want. At the same time, greater life commitments meant I had less time to maintain my disparate hosting accounts with their own variations of the LAMP/FNPR stack. I needed something simpler.

Just to be clear, this is not anything against the WordPress team. To me, Matt Mullenweg represents the good of my generation; the antithesis of Mark Zuckerberg in so many ways. You can write on WordPress.com, but you can also run it on your own server. You can export your data at any time. That matters.

So now I find myself typing this post in TextMate 2. When I’m done, I’ll be using Git to commit the post to Github, which will use Jekyll to generate my site. For want of a better word, it’s such a different paradigm to what I’m used to with blogging, but as a developer it feels so right.

I eschewed (gesundheit) the capable Octopress framework for plain Jekyll. Writing the themes, RSS feeds, configuration and toolchain from scratch instead has been a thoroughly rewarding learning (and re-learning!) experience. At the same time, I’ve learned enough to help other people make the switch.

Over the coming weeks, you’ll no doubt see a few posts with discussion about more Jekyll-specific learnings.