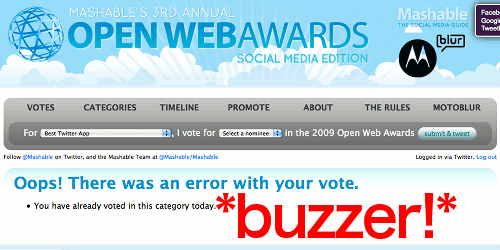 I've always thought the idea of the Mashable Open Web Awards was at best just a misnomer and silly, but this year I decided to give it a try. Most of the categories had nothing I wanted to vote for, and in the case of those that did I was incorrectly informed I had already voted for it! In protest, I'm creating this post.

Now that it supports Twitter Lists, I can keep track of tweets in multiple columns from different parts of the world even easier than I could before. It single handedly makes widescreen monitors (that are otherwise useless for programming) a useful thing to have!

I originally used it because Foursquare wasn't available in Singapore or Australia, but now I reckon it's superior anyway, especially since Leo and the gang on This Week in Google said they didn't like it :).

Not one of the options. Since Tweetie's disappointing interface downgrade in version 2, Birdfeed is now by far the most polished and easiest to use Twitter client for the iTelephone. Its fast, stable and supports multiple accounts.

A follow up would be the Deutsche Welle feed at @dw_english. 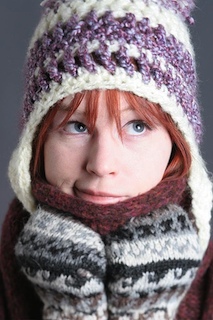 In no particular order, Marian Call is brutally honest, down to earth, funny, charming, beautiful, talented, she loves Firefly and most important of all: she's awesomely friendly! Despite having thousands of followers and a schedule busier than… somebody with a really busy schedule, she'll almost always reply to tweets from her fans, including little old me!

There are two very close follow up folks in this category. First we have @NeilHumphreys.
Enough said! Better still, it means I can follow his antics and thoughts without having to go to his website that uses Flash which I don't have on most of my computers.

The other runner up is @AlexLindsay because his tweets are ridiculously interesting and honest, and like Neil he always replies to tweets I send him.

The microbrewary in Singapore who's Twitter account is run by a real person not a bot and that if you send messages to you get cheerful responses! I haven't had the chance to enter any of their competitions or quiz nights yet, but using Twitter to announce them is a fantastic idea.