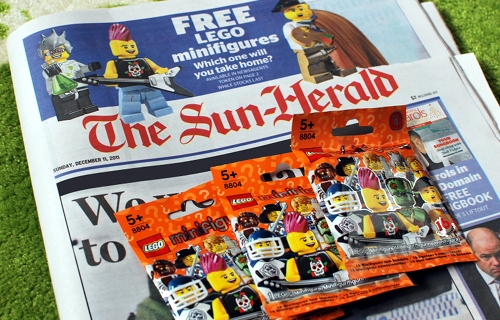 So there I was sitting ay home attempting to get over my current flu thingy while staring at our amazing new Christmas tree of win, when @Jeorgina mentioned on Twitter that the Sun Herald would be giving away free LEGO figures with their Sunday paper. Hardly surprising, given the Sun Herald is the Sunday edition of the Sydney Morning Herald, though despite the name it doesn't concern a colossal ball of nuclear gases in place of Sydney. In the morning. But I digress.

Mustering the little energy I had, I braved the great outdoors to head to our local newsagent, which by a cruel twist of fate had closed for the day. Fortunately, I knew our local supermarket also sold copies of the paper, so I walked slowly with the energy and pain of a hundred year old man with arthritis to pick myself up a copy. Which is to say, buy out their whole stock. All… two of them.

No sooner had I bought these copies of the paper, but our typically Melbourne Sydney weather asserted itself, and I was forced to take shelter in a nearby coffee shop. Shivering and weak and cold, I was attended to by several lovely baristas. If they were a little grossed out by this clearly diseased young gentleman, they didn't show it. I sat there for the better part of two hours, leisurely reading my Kindle I carry around with me everywhere, and chuckling at the people attempting to ford the rain outside with their inadequate rain gear and inverted umbrellas. 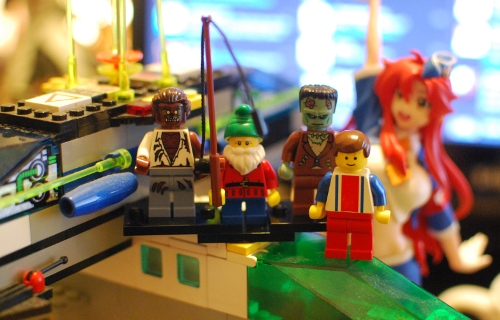 Fast forward to this morning. With the promotion a distant memory, I headed to the doctor to have a followup checkup to measure my progress (as what tends to happen in followup checkups), when low and behold I noticed a copy of the previous day's Sun Times on the table. I enquired to the doctor if I may relieve him of his copy for the LEGO promotion, to which he chucked and questioned whether I was too old for playing with such things. "Growing old is mandatory, growing up is optional!" I retorted, with an air of sophisication I was able to maintain for a few brief moments before I started sneezing again.

Excited as a child who's about to receive LEGO (oh, wait), I made my way to our local newsagent and presented the three stubs from the Sun Heralds I'd collected, and left with three LEGO figs!

Perhaps speaking to my current health, the three I received were a Werewolf-like creature, a Frankenstein, and a little elf with a fishing line! The detail was amazing, I think Yoko in the background agrees!

Pictured next to them above in the picture avove (well, that was redundant) is a LEGO person I've had since I was 6, and whom acted on behalf of me when I used to play with LEGO every afternoon after school.

Everything is coming up Milhouse. I think I'll stop now.