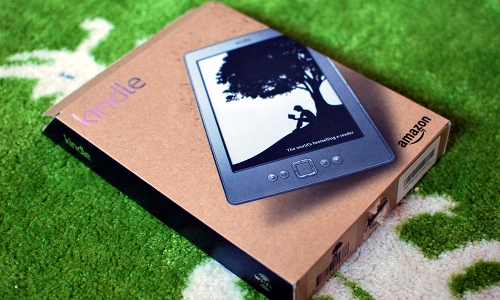 After months of mulling (as distinct from mulleting), I finally caved today and decided on a Kindle!

The least you need to know

I used to read obsessively as a kid, but when I started university I tended to read fewer novels. Partly due to a lack of spare time, partly because I was always moving around and didn't have the luggage space to be carting around books on camels like a certain person.

With the iPhone 4 and iBooks though, I started reading more. The convenience of whipping out my phone on a train, when I was waiting for the train, during boring meetings or lectures (you didn't read that) and reading a book was marvelous. The relatively poor phone reception in the Airport and East Hills tunnel (particularly during the morning rush) also lent itself well to consuming pre-downloaded material!

As I started getting more serious though, the deficiencies of using the iPhone as a book reader became more evident. The super high pixel density meant text was ultra sharp and readable, however having to turn the page each time I finished a paragraph started to get old. Using it obsessively as a Twitter client also meant it often didn't have the juice to read a book on the train ride home. In the late evening in bed, even at the lowest brightness the screen still had too much glare to look at.

I could have got an iPad, but the Kindle appealed to me for its eInk display, huge battery life, and the fact I could probably fit it into my pocket… I hoped! My iPhone 4 is already a twittering, internet using machine for the go, all I wanted was something that would let me read. 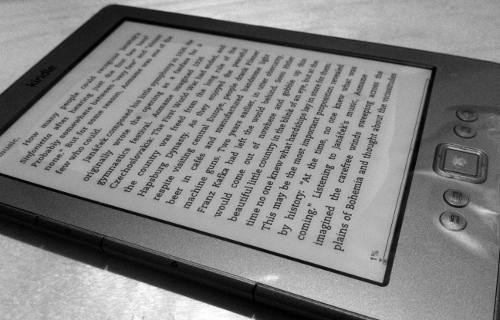 You didn’t need to read those previous paragraphs

This afternoon I came home with a Kindle 4, the current low end iteration of the ebook readers that have taken the tech world by storm. Which could be dangerous, because lightning bolts could cause serious damage to kindling, and its surrounds.

Firstly, the packaging wasn't quite as elegant as an Apple product (nothing else ever is), but it was nevertheless clever and fun to open. Some people scoff at this, but in many East Asian cultures the wrapping of a present is often just as important as the present itself! Scoff if you must, I don't care :).

Reading the 170g weight in the product specifications did not prepare me for just how light the device is. Feeling it in my hand, it weighed less than my iPhone 4! As an added bonus, not only do they fit into the leg pockets of my tactical pants, but in the regular side pockets as well! I can see myself taking this thing everywhere, which means I'll be reading far more too.

Syncronising was also also a snap. One of my few gripes with Apple hardware since my first iPod in 2003 was the need to use iTunes; the Kindle merely appears on the desktop as a USB device which you use to transfer your files. That's it! I have to admit I was unreasonably happy by this.

The screen is what blew me away the most though, as one would expect. Loading up some P.G. Wodehouse, Bill Bryson, Michael McCollum and picking up right where I left off, the difference in legibility and the extra screen real estate compared to the iPhone was incredible. I adjusted the default font size a point lower, and was charging through pages like nobody's business.

Like the iPad, I think eInk is the kind of technology one has to see for themselves and use to truly appreciate it. It really does just look like a sheet of paper, and save for the small screen refresh flash (which I got used to fairly quickly), holding it in your hand it looks like a real novel. Given I only bought electronic copies of McCollum's works for example, it finally felt as though I had a real version of one of his books, in my hand. It was rather wonderful to say the least :). 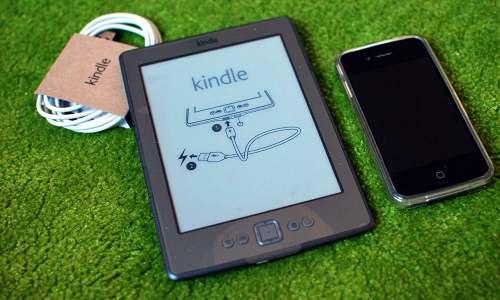 Given I've had this less than 24 hours I was bound to run into n00b problems, but just a few quick ones.

Secondly, and this is still unresolved, I've been unable to enter the password for our home WiFi connection because I haven't found a way to enter a vertical bar/pipe "|" character on the virtual keyboard. For now its not a concern because I've just been loading books through the USB cable, but it's still a pain.

Anyway, having lots of fun and can't wait to snuggle up in bed with some books that weigh even less than a paperback! No doubt I'll be posting more about it in the future.

If you’re thinking of buying one, feel free to use my referral code to support the site, or go here if you don’t like the idea of referrals. Thanks :)