Here’s a blast from the past: a screenshot of my FreeBSD desktop from almost a decade ago to the day! 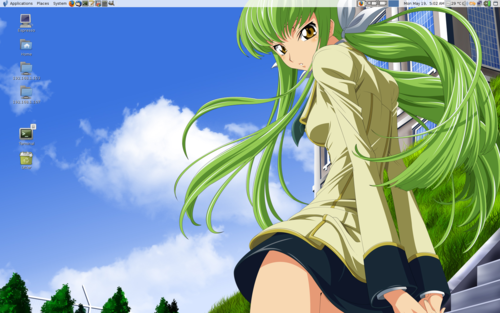 It was a DIY Intel Core 2 Duo E8400 tower in a slender white case with a Coffee Bean and Tea Leaf sticker, hence the hostname “Espresso”. The depicted character is C.C., everyone’s favourite pizza fan. It shows 29 degrees at 5am, that’s even warm for Singapore at that time.

I was going through a lot of desktop environments back then; 2008 was my KDE and GNOME experimentation days before going back to Xfce that the Cobind Desktop first introduced me to. The cool kids were still using tiled window managers or OpenBox.

To expand on the nostalgia, my primary portable machine was still my first-gen Intel MacBook Pro at the time. I had to be careful to get universal binaries for it; PowerPC stuff worked decently, but not needing Rosetta was a bonus.