Fellow Anime@UTS alumni @_BADCATBAD tweeted her first anime crushes. It didn’t take me long to figure out who mine were, nor should they probably come as any surprise to anyone who’s read this blog over the years. 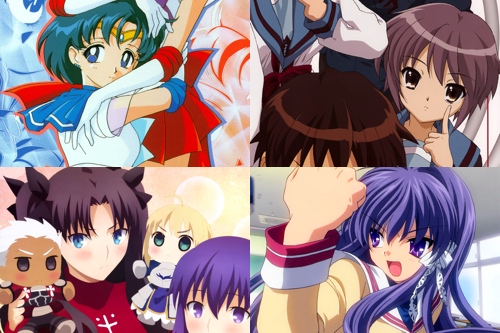 From top left to bottom right:

Full disclosure, is a phrase with two words. I did unabashedly like Asahina Mikuru from Haruhi at the time as well, but not to the same extent. Shigure Asa was also a fantastic standout character from an otherwise awful harem series, but she missed out being on this list by a matter of weeks. Ditto basically every character from K-On!, one of the single greatest shows and four-panel comic series of all time.

I also noticed all but one of the pictures I found within five minutes also have other characters from their respective shows partly in shot. Tohsaka Rin’s was deliberately chosen because she was blushing—cough—but the others were entirely coincidental. At least I got Kyon’s magnificent hair in.