Okay, I'm sitting at the Coffee Bean and Tea Leaf in KLCC for the last time… tonight we leave to go back to Singapore. Of course I'm a bit sad to leave KL, but at the same time I grew up in Singapore, spent my entire high school and some of primary school there and so forth, and I must admit the trains and buses are better, and I do feel safer walking around at night there. Oh, and SCV MaxOnline is light years ahead of TMNet StreamyX… I'm sorry but it had to be said! What am I going to miss? The late night drives with my dad to Putrajaya to take pictures of all the weird buildings and bridges, shopping at The Curve, the guys down in Imbi Plaza, teaching the Japanese girls I met in KLCC Engrish (Aussie Engrish of course!), and of course the Teh Tarik and Prata at random roadside stalls, the InTech section of the Star newspaper, the Sepang circuit (though maybe I come back for that sometimes lah), the friendly people at the Starbucks at Cheras who put up with me sitting there for hours at a time :D, seeing pictures of Abdullah in his really amazing colourful formal shirts that I really want but would probably look silly in and so forth.

I'll be back on the weekend with my dad and the car to take some more stuff down because it won't fit in our Range Rover! Yes you read me right, we have more excess stuff than will fit in a hideous, ugly, non-green SUV. 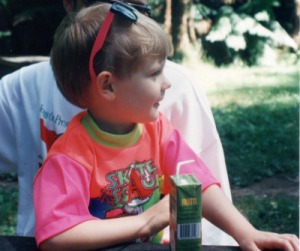 Ruben when he was a wee little thingy: we're moving again??

So tomorrow I'll be posting from Singapore. Back to filling web forms out like this, then getting emails from the admins asking if I faked it: