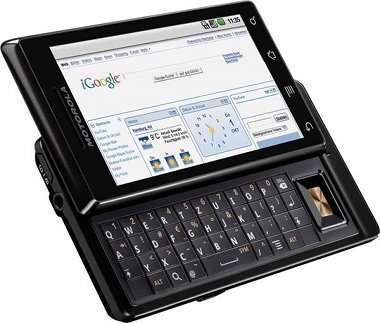 Hello Moto! While I love my iPhone to death ever since I got it in 2008 and think it's the single greatest electronic device I've ever owned (I'm serious, it's had that much of an impact on my life) I've been keeping a keen eye on the competition, and this Motorola Milestone is the first to come along that looks really tempting, and circumstances mean I could potentially get my hands on one as soon as month from now!

The Milestone is the European, GSM version of the American Verizon CDMA Droid that has been touted as the first true competition to come from anyone since the iPhone was launched. Unfortunately the Pre was an inadequately equipped vessel for the otherwise beautiful Palm WebOS and the G1 hardware was less than stellar, but if I'm to believe the reviewers the Milestone is sleek, fast, and integrates extremely well with Google's web offerings (which I suppose makes sense).

According to Geeky Gadgets the Milestone will be available in Germany starting this month, which means when my dad, sis and I go to Frankfurt and Munich for Christmas to see relatives I could potentially get one while I'm over there! Das is gut!

I must admit I've been really, really, tempted by the Android platform, even if it turns out its not as free and open as was originally implied. As I said, I love my iPhone, but I'm also a FreeBSD user as well as a Mac guy and I love tinkering with stuff. Who knows, if I were that masochistic I could carry two phones around with me, just as I've been known to sometimes carry two laptops with me :).

I kid, but I've actually got used to carrying around two phones since I started living some of the year in Australia to study and all my holidays back in Singapore. My iPhone always has the SIM card for the country I'm in, and my Palm Centro has the overseas SIM, that way I'm not raking up expensive roaming charges but I don't miss calls or messages from people who don't know where I am.

An iPhone and Motorola Milestone would be an amazing combination!