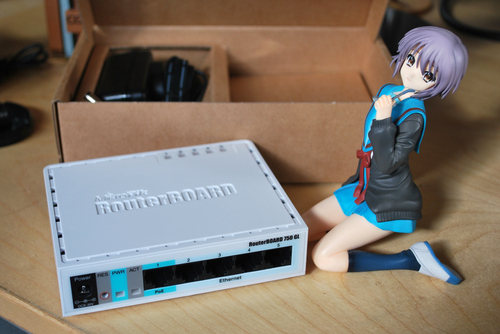 Rooter means something else

Ever since I connected two of our home computers together with a D-Link 5-port 10/100 hub, I'd been under the impression well known brands like Linksys, Netgear and D-Link were the way to go. Which is to say, they were the only brands I'd ever heard of. This all changed when I met Eugene Li in Singapore, and Andrew Cox in Adelaide who shared knowledge of an infinitely better mob.

MikroTik are a company out of Latvia of all places that (I've been informed) produce the most sophisticated, robust and flexible networking hardware on the market, so when we'd finally grown tired of our bargain basement Netgear modem/router we'd got for free from Optus, I knew who to investigate.

As with our EPSON GT-S50 document scanner, the RouterBOARD 750GL comes in a relatively nondescript box, presumably because only those who've done their research are aware of them, and their customers don't need to be told what a router is! Buying from a local distributor, I was also given an Australian power supply unit in the box instead of a regular European PSU.

Compared to the large switches with lots of unnecessary plastic I'm used to buying from generic consumer brands, the device itself is tiny and rather svelte, and it's a fully featured router! It was also cheaper than most of the consumer grade networking hardware I'd bought, and having had it running for several hours now it also runs cooler than any networking hardware I've bought before. 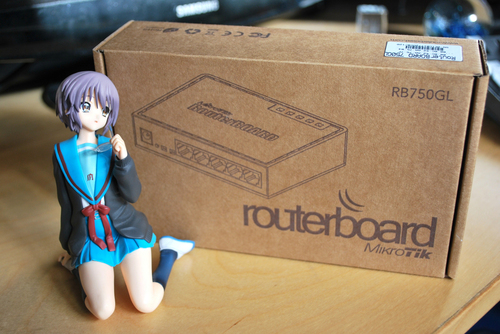 Our Netgear gear can cook eggs

After years of putting up with combined devices that don't do any of their tasks very well and that burn carpet and table surfaces, I've realised my dream of having a separate modem and router. My TP-Link 8840 (another Andrew Cox recommendation) that I got for peanuts which I'll be using in bridge mode should be arriving in the next couple of days, and I'll finally be able to retire our current creaky setup.

I can't wait to put it to the test: seeing how it can handle two concurrent, always on VPNs, dozens of torrents from several different machines (ahem), multiple Skype connections and enough Vimeo/YouTube to substitute not having terrestrial TV. Because we don't.

For the sake of disclosure, yes I'm aware there's an anime fig in my pictures here. For several years Yuki has been featured in posts whenever I buy new computer hardware; considering her character in the anime series it made sense!

I just wish her skirt were a little bit longer, often times I have to take pictures again because she ends up showing a little more than perhaps she'd like. Which is a shame, because I got a great picture of her that looked as though she was wearing the router as a rocket pack. Yes, I put my new devices through strenuous testing!

And finally for all my Latvian friends out there, all two of you!