Malaysia is a tiny, densely-populated country, especially around the Klang Valley on the peninsula. But for those of us who grew up on the even tinier city-state island of Singapore, crossing the Causeway into the land of Lat, Proton cars and nasi lemak felt like a trip into endless highways and vast, open spaces. My dad would ride his motorcycle there to unwind on the weekends; my sister and I would have school camps in the relative wilderness outside the main cities. It’s the closest Singapore has to a hinterland, not having a native one herself.

It’s in that nostalgic context I stumbled across this video of another super shopping centre being built there, this time in the southern border city of JB. They used drones to great effect filming this. 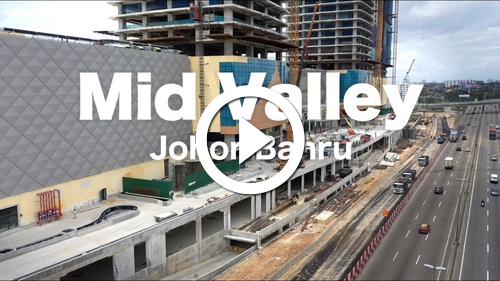 Even as a kid I was always struck by how many grandiose shopping plazas and office buildings Malaysia had, often with swaths of boarded up or empty stores. Nothing on the scale of the PRC, but before all vacancies were filled, another concrete tower would spring up elsewhere. Perhaps the most well known example was the Hyatt in KL; it’s half-completed shell stood there for more than a decade before construction resumed.

Retail is being shook up in places like Australia and Singapore, and doubly-so in the United States. A combination of high rent and people flocking to online retail are squeezing interesting and fun stores out for those with the profit margins to stick around, such as high fashion and restaurants. Developers in Malaysia must be confident they can ride out this wave, or offer an experience that can’t be bought online. After all, this is the land of indoor shopping centre roller coasters.

Clara and I are hopefully going back to Singapore and Malaysia later this year. I’ll be keen, and a little nervous, to see how much has changed.