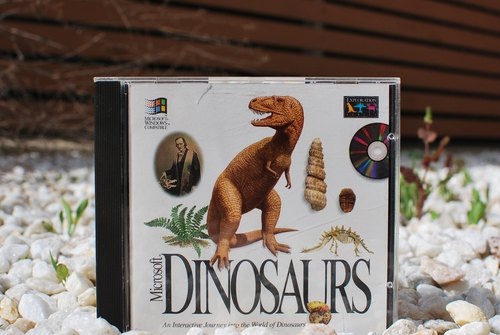 Barely had I finished that previous whimsical post about DOS nostalgia than something arrived in the mail that I just have to ramble on about here now too! I'll pretend it was intentional. Yeah, that works :).

In 1994 or 1995 after we'd had our original DOS machine for a while, my dad invested a small fortune upgrading it with a Creative Hex Speed CD-ROM drive and SoundBlaster card. By that point we'd long since upgraded from Windows 3.0 MME to Windows 3.1 which meant we could now finally run some of the Microsoft Home multimedia titles we'd been using at school and at my grandfather's place.

Since then I've long since moved over to the Mac and FreeBSD and don't run Windows any more, but I've been really impressed by how DOSBox has been able to cope under the stress of running Windows 3.1, then running these old CD-ROM titles! So far we have:

It's surprising the company responsible for the tacky and clumsy Windows XP, Vista, Windows 7 and Office 2007 interfaces were able to come up with such polished, cool software before. While the idea of the multimedia CD-ROM has long since been eclipsed by the web, these were fantastic products when they came out.

Anyway I can now add Dinosaurs to our collection (well look at that, I already did!) having picked it up on eBay for $8 including shipping!