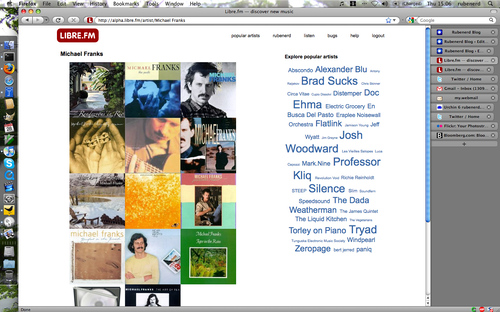 I tend to listen to Whole Wheat Radio during the early afternoon, and my own music later in the evening. Since using Libre.fm to scrobble music I've noticed many artists I listen to haven't been in their database before and are subsequently automagically added. What a mouthful.

The latest such artist is Michael Franks! Currently if you click any of these covers, I'm the only one who's played him, even Popsicle Toes and Tiger in the Rain. Unfortunately I don't have all his music in CD form, I inherited from my mum all his classics on original LPs but as far as I know I don't think any scrobbling client currently supports such archaic devices :).

The great thing about being an early adopter of a service is you get to be part of the site during important milestones like this. Well, at least I consider them important. As Michael sang in one of his songs: "Just continue reading me…" which doesn't make sense given he's a singer/songwriter not an author. I guess I could read along with the lyrics. Why do I talk to myself so often here now? Can senelity set in when you're 23? Don't answer that.

I wrote my Michael Franks music review back in January 2007.