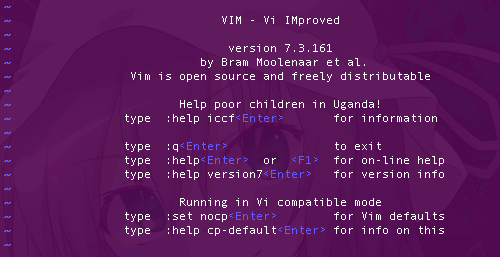 Vim is better than Emacs.

Homebrew laying it down

Unlike some other package managers, Homebrew attempts to use Mac OS X’s default userland software where it can. While most of the time this is advantageous (DRY but for software), it also means sometimes you’re stuck with a prior version until Apple decides to update, such as Vim.

I've reviewed MacVim here before and like it very much, but often I prefer not having to leave the terminal for certain tasks. Also, (at the time of writing this) the version of Vim bundled with Snow Leopard is 7.2.108 (over six months old), whereas the latest version is 7.3.161 which fixes several critical issues and adds features.

Fortunately, I went against the Homebrew developer's advice (Playing with Homebrew on Mac OS X) and installed it in /opt/local, leaving /usr/local for software I build myself!

The easist way to install and keep Vim current is using Mercurial which Vim's developers have recenty swtiched to using, very cool! Of course you'll need Mercurial first, and using the Python easy_install system is (IMHO) the easiest way to get it in OS X. Its right there in the name!

As I said, I build my own stuff in /usr/local/, so I clone the Vim source into that, then build it. Mac OS X doesn't come with a /usr/local/ tree by default, so you may need to create that first.

And budda-boom! The editor that's better than Emacs. I would know, because I'm using a Mac Pro that doesn't have a built in CRT. See what I did there? The Bird is The Vim.