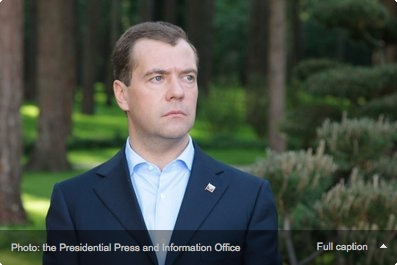 With the (continuing) disaster in the Gulf of Mexico, in true technocratic style Dmitry Medvedev has proposed a pragmatic, logical idea: an international environment fund. So it probably won't ever happen.

From his official Kremlin blog:

"The environment and the economy do not contradict each other. A properly functioning economy is an environmentally friendly economy."

Yes! Spasiba! That's what people like me have been saying for years!

"Perhaps we should consider setting up a global fund for insuring or re-insuring against these sorts of [environmental] risks. I think I will raise this subject at the G20 summit in Canada later this month."

I'm still frustrated and bitterly disappointed with world leaders for their combined abject failure to rise above their shallow, short term self interests to ensure the future of our planet at the Copenhagen summit earlier this year. Even if the whole event was just a token effort as some environmentalists claimed, it would have at least sent a message that they were willing to start taking the issue seriously. They couldn't even do that.

Medvedev's proposal sounds like an excellent way to let these world leaders regain some of our trust by committing funds to help in the wake (and hopefully in the prevention) of future environmental disasters that affect all of us.

I could spend paragraphs elaborating on these questions, but I'll leave them short and sweet:

As I say, Medvedev's idea is f-ing brilliant, I can't wait to hear how other world leaders spin the idea to justify why they won't support it. Hey, they've got to be doing something with all our tax dollars, and those PR folk have families to feed too, you know. Not that I'm bitter or anything.

Why is Medvedev saying this and nobody else?

Waah! This is just a step to a World Government!

Even if this were true (and it clearly isn't)… so what? It's high time we start tacking these issues outside political borders, because they affect all of us.