Given I do most of my blogging on my retro MacBook Pro, I decided to finally cave in and take advantage of the 30 day free trial of MarsEdit by Red Sweater software for Mac OS X. In an electronic nutshell, it didn't meet my needs but I could see how it would be useful for most people.

MarsEdit is a dedicated desktop application that allows you to publish and modify blog posts without having to use web based interfaces that come bundled with blogging software such as WordPress or Movable Type which are often unreliable, poorly designed and slow. In this regard I could certainly see the appeal, I was able to edit posts for this blog directly from a desktop application. 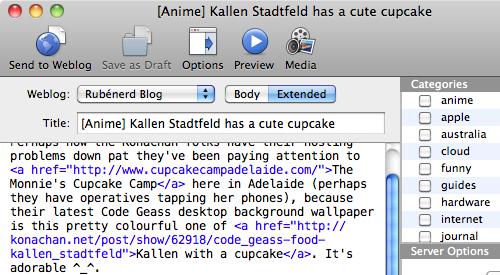 My first MarsEdit problem was that it wasn't able to automatically detect my blogging settings, so I had to configure them manually. I (begrudgingly) run WordPress for now which I've heavily modified and attempted to bolt down to make it more secure, but in the process I seem to have unwittingly made it more difficult for external applications to access the XMLRPC features. I prefer to see this as a positive aspect of my setup, but it certainly doesn't help software like this do its job!

The second problem had to do with its tagging system. MarsEdit has the ability to generate nice Technorati tags like I used to use here back when my blog was getting started, but I couldn't see anywhere to enter WordPress native tags. This could very well be PEBKAC on my own part though, so I'll leave it at that.

Finally, in another example of my own WordPress implementation being different from the default which trips up MarsEdit (and other XMLRPC clients), I don't use the default wp-content/uploads folder for my images because I prefer to use tried and true SFTP instead of the WordPress Media page (which used to give me a ton of problems), so MarsEdit's media uploader also doesn't work, at least not out of the box. 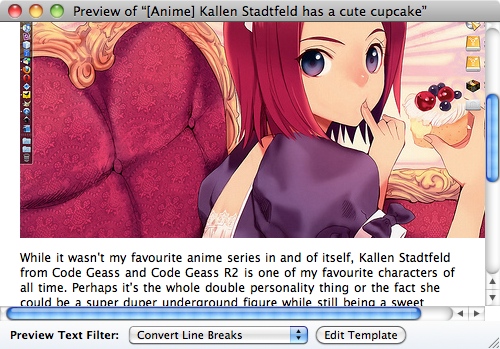 All in all, my impression is these three problems perhaps prove I'm a fringe case or a blogging outlier which doesn't mean MarsEdit isn't a beautifully constructed piece of software, and there are plenty of people for whom US$29.95 would be a worthwhile investment for such software, but it's just not suited to my needs.