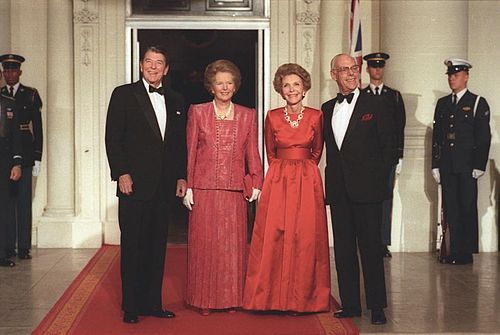 A day after we learned about the death of The Iron Lady, I read this piece by Glenn Greenwald in The Guardian:

News of Margaret Thatcher’s death this morning instantly and predictably gave rise to righteous sermons on the evils of speaking ill of her.

This demand for respectful silence in the wake of a public figure’s death is not just misguided but dangerous. That one should not speak ill of the dead is arguably appropriate when a private person dies, but it is wildly inappropriate for the death of a controversial public figure, particularly one who wielded significant influence and political power. “Respecting the grief” of Thatcher’s family members is appropriate if one is friends with them or attends a wake they organize, but the protocols are fundamentally different when it comes to public discourse about the person’s life and political acts.

I’m inclined to agree with this, on principle. I’m too young to remember Thatcher, but I was subsequently horrified to learn what she got up to, to put it at it’s mildest. Her death, for better or worse, signals the final end of that rather sordid chapter in human history. For the sake of keeping this blog post under a billion words, and my blood pressure in check, I’ll leave it at that.

On the other hand, I personally can’t bring myself to hate upon someone like her immediately after their death. I despised Tony Snow, but when he died of cancer I still sent my best thoughts to his family. Having seen personally the horror and pain that disease that inflicts, I wouldn’t want that put upon anyone.

I suppose it’s easy for me to sit here in my comfortable home in Australia discussing the ettiquete of when someone dies. I wasn’t affected by Margaret Thatcher’s policies. If she’d affected me or someone I love, I’d probably have a different take.

I guess, as with a lot of things, it comes down to personal taste. I detested Margaret Thatcher, and my left-leaning side may even write a long diatribe about her at some point. Just not… today.