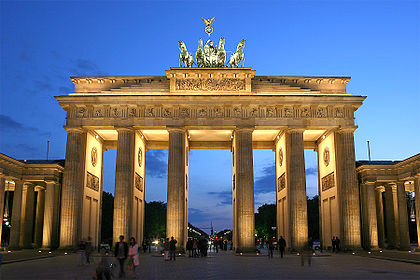 Our latest Europe trip has rekindled my interest in Germany, which I'm sure my old man will appreciate :)

In some of my spare time I've been reading up on modern German history, and given the 20th anniversary of the falling of the Berlin Wall (and the Iron Curtain in general) there seems to be a resurgence in interest.

Of note for me was just how nervous the Western powers were with the prospect of a united Germany even as late as the 1990s. Margaret Thatcher was perhaps the least keen, going as far as telling Gorbachev:

"this would lead to a change to postwar borders, and we cannot allow that because such a development would undermine the stability of the whole international situation and could endanger our security."

Did Thatcher do or say anything right? Whoa, I'd better step away from that loaded cannon, I'm not touching that Pandora's box! Seriously though, you didn't read that. Pretend that question was never asked. What question? Very good, I like you style.

She should have followed the marks (marx?)

Two terrible puns, in one heading? A new record!

What interests me isn't how such doomsday political and military predictions turned out to be unfounded, for one both Germany and Japan have been on their best behavior since World War II. What they did manage to do was go from literal ruins to being the forth and second largest economies in the world. People often attribute this economic success to the Marshall Plan as the US bailing them out, but Germany received only a fraction of the funds both France and Great Britain were given. As Baldrick from Black Adder would say… "I have a cunning plan!"

Apologies for the terrible grammar, it's late at night and I'm half asleep but I just finished reading a book on the German reunification and I have all these ideas floating around inside my head.

I often wonder what would have happened if the Iron Curtain hadn't come down, if Reagan hadn't taken all the credit for himself, and whether East and West Germany still existed just as Korea remains divided today. Why did wars over political ideologies have to be fought in innocent proxy states?

Credit to Thomas Wolf on Wikipedia for that amazing photo of the Brandenburg Gate. I've been to Munich, Frankfurt am Main and Stuttgart but still not Berlin.