Long-time Rubenerd reader Rebecca Hales – no relation to Halestrom other than sharing a fabulous name – asked where I’d got up to with the fitness post I’d promised back in June. Her question wasn’t entirely selfless, as she contributed material to it and was obviously getting antsy at seeing it posted on this esteemed publication. I may have performed a little embellishment in the description there, and by that I mean a lot.

(Not alot, that’s an entirely different beast. I feel between that and gotten we’re fighting a losing battle, but one can dream).

I wrote about Clara and I wanting this Arena gear back in April, as part of our push to get more exercise and be healthier:

Little did we know we could have been weeby at the latter as well. Introducing the Arena Manga One Piece! … Arena has a range of manga themed outfits, complete with darumas, seigaiha patterns, maneki cats, and a Great Wave off Kanagawa, among other Japanese motifs.

This is what the ladies outfit looks like, as worn by a model whom the photographer decided to catch sneezing. Gesundheit! 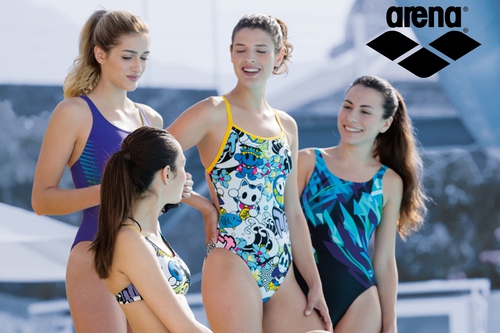 Rebecca commented within a longer email thread that she thought the design was cute, but that it came with a caveat:

I would be careful recommending that swimsuit for Clara because it’s uncomfortable. I like the open back but I’ve worn the same [style] and the shoulder straps are very thin and cut my shoulders quickly when diving :P

I haven’t had to contend with this as a gentleman, but I’ll take it under advisement. Now this has been pointed out, I can see the other people in the image above have more sane straps. Maybe they were causing her to sneeze, who knows?!