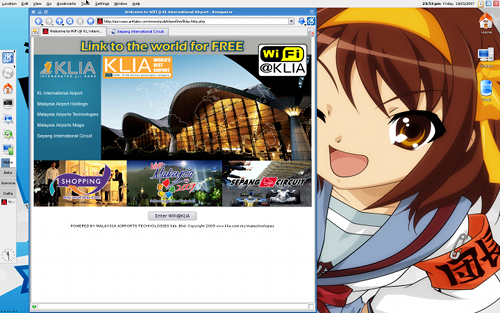 Martin Wilke maintains one of the FreeBSD blogs I read most often, and one of his posts from February sent me down memory lane, and made me think about FreeBSD's future.

Going through his archives this evening, I found this post about BSD In Malaysia, which opened thusly:

Few days back I’ve met up with Mohd Fazil Azran for a small talk about *BSD at Starbucks coffee.

Funnily enough, I started experimenting using FreeBSD when we were living in Kuala Lumpur. Our home Streamyx internet was so laughably unreliable, I used to commute with my dad to KLCC where he worked, and hang out at Coffee Bean and Starbucks to download portsnap updates and build the latest ports on my MacBook Pro. You probably know KLCC from those Petronas Twin Towers.

Here's one of the posts I wrote at the time, from 2006. And another, specifically from the Starbucks in KLCC. And finally, another when I'd gone to the airport to use their internet. KLIA wasn't that far from our house.

Anyway, I thought it was cool someone was talking about BSD, in a place where I first learned and experimented with FreeBSD.

As it happens, Martin blogged about FreeBSD in Malaysia specifically to highlight what he sees as a decline in the BSD community there.

I was interested to know why Malaysian *BSD community is so inactive, and from the discussion, I’d say that the reason is more likely caused by too much of politics in the group, financial issues, lack of interest to share knowledge and blablabla.

I was never an active part of the Malaysian BSD community (save from blogging about BSD in Malaysia at the time), but I agree with Khairil Yusof who left a fairly detailed comment. In brief: "the younger generation are used to the ease and flash of Fedora and Ubuntu Linux and therefore, start on those and get hooked on it."

With the release of FreeBSD 9.2 and the official inclusion of pkgng, perhaps this will change. I know from personal experience building ports was the least fun part of running the OS, and now that's been taken care of I've moved all but two of my machines back to it. I've always asserted (with a modicum of confidence!) that FreeBSD is technically superior, faster and more secure, but it was no secret that using it as a desktop OS was more challenging than Linux.