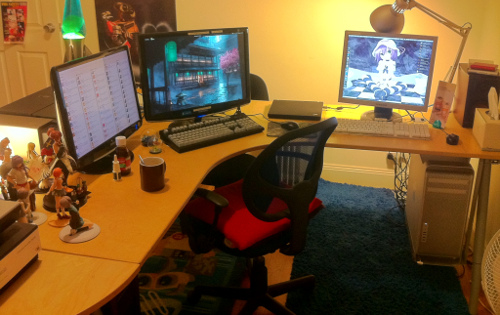 Those of us with Mac Pros haven't been feeling the love as of late, but at least Tim Cook has bucked Apple's secretive trend and assured us the line still lives

It didn’t used to be this way, Smithers

For the longest time, I had a souped up MacBook Pro as my primary workhorse and travel companion. Given I was studying in Adelaide for half the year and spending the other half back in Singapore, it made sense to have something I could throw into a bag and take with me.

Problem was, just as the President of the US needs several support planes to fly behind his Air Force One jets (yes, a 747 can't carry all his crap), my sheer amount of data necessitated a support crew. Long time readers of my blog may remember I dubbed it my Stonehenge of external hard drives. At one point I had 5 desktop sized drives and 4 notebook ones, each needing their own data cables, and in the case of the desktop ones, their own power supply cables too.

In total, they needed 14 cables. 14 CABLES. Tangled up and spread across my desk. They needed their own powerboard!

To get around the problem of insufficient ports, I had powered USB hugs (freudian slip, USB hubs!) and an ExpressCard 34 card that added two more FireWire 800 ports and an additional USB. FireWire drives could be daisy chained like SCSI, so that solved that.

Somehow I made it all work, but suffice to say it was flakey. When I sneezed particularly hard and bumped a FireWire cable as I reached for a box of tissues causing an entire daisy chain of drives to uncleanly unmount, I knew there had to be a better way.

Exibit 1, a horrifying photo from 2009! And at the time I was excited, can you believe it!? By that time, a family disaster had necessitated moving back in with my old man and sister while we tried to consolidate, console and pick up the pieces. The silver lining was I wasn't living in two different cities anymore!

So I purchased a Mac Pro. Albeit a refurbished unit with the previous generation Xeon CPUs, but I wasn't buying it for performance. That said, it easily outperformed every other machine I owned, and also doubled as a handy space heater when I moved to Sydney! :D

One afternoon I cracked open my hard drive enclosures, shoved them all into that Mac Pro tower, and by that evening I'd replaced four external hard drives with their 8 cables… with a tower and one cable. Over the course of the next six months or so, I gradually upgraded each of the 750GB and 1TB drives to 2TB and 3TB drives. All running internally, at native speed. No snagging data cables, no extra spaghetti power boards. It did far more for my quality of life than it should have!

But nobody buys Mac Pros, Shredder!

I'd argue the iMac is still the best desktop machine in Apple's lineup. The IPS screen itself is worth the price, and you're getting a wonderful computer behind it for free.

The Mac Pro is often billed as a premier workstation class machine for people doing video editing, breaking poorly implemented encryption and running cold fusion reactors. For me though, it's less about the performance and more about being able to shove a ton of crap into it and have it work flawlessly.

People have been whinging about the "dated" Mac Pro case which was borrowed from the original PowerMac G3 in 2003 (of which I also owned at one point). All one needs to do is spent five minutes battling with the cables in a regular PC chassis to appreciate how wonderfully simple it is to add components to a Mac Pro.

Case in point: I recently upgraded my Linux tower, and swapping the hard drive in that case scraped more skin off my knuckles than when I faceplanted near our train station. Was also much less amusing for onlookers as well. "Mummy, why has that man stacked on the fence!?"

No publicity, but so what?

As I've learned from people in Apple retail and from watching Apple keynotes, the Mac Pro isn't bathed in the same degree of limelight as their other products. I'd argue that's to be expected, those who are considering Mac Pros won't be swayed by the same marketing that is used to sell consumer products. If you one of the few who need Xeons and monstrous expandability, an iMac won't suit. It's as simple as that.

Tim Cook's understated response to a customer's concerns about the Mac Pro seem to fit this just fine, me thinks.