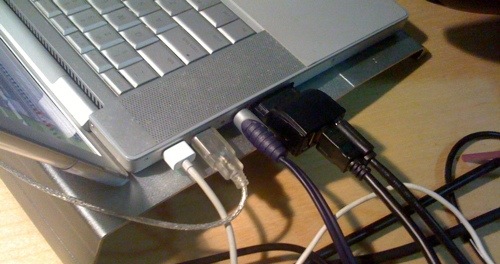 Given my very vocal opposition to Apple removing the FireWire port from their MacBooks and subsequently adding them back, I've been fairly quiet about the removal of the ExpressCard slot from all but the 17" MacBook Pro. I intend to rectify this, because as Madonna said, everyone is entitled to my opinion. In short: removing the ExpressCard slot from the 15" and not having them on the 13" despite calling it a Pro is right up there with the removal of FireWire ports in silliness, perhaps even more so.

I remember when I discussed the removal of FireWire and I was called out because Apple has been know to remove legacy ports and devices such as floppy drives. As I responded before, the problem with this analogy is the replacement ports and devices were equal or superior to the ones they replaced, and they allowed a certain level of backwards compatibility. If you needed to read floppy disks, you could get a USB floppy drive.

As with the loss of FireWire when Apple forced users to a slower USB 2.0 interface, Apple has replaced the ExpressCard slot on their premier notebook computers with an SD card slot in the hopes (one assumes) that customers will use the FireWire 800 port for their data transfer needs. Once again they've removed an interface and replaced it with a slower, inferior one.

I also just can't wrap my head around their decision to add an SD card slot of all things instead. Firstly, professional users probably have high end equipment that use CompactFlash cards instead, and people like me with Nikon D60s use a USB cable and Image Capture.app. Who are they targeting this at?

What about the need for many in Europe to have ExpressCard slots for their wireless modem cards? What about media professionals who buy MacBook "pro" portable Apple computers expecting them to be… well, professional computers?

On a more personal note, ExpressCard (and PCMCIA Cardbus before this) slots have also allowed me to extend the life of expensive hardware. My venerable first generation MacBook Pro from early 2006 is still going strong and feels just as fast as it did new, but in April 2007 the FireWire 400 port was shot by a defective external hard drive. Repairing it would have been prohibitively expensive, so I bought a FireWire ExpressCard and continued on as normal. I'll admit having this ability taken away scares me silly. Perhaps that's their intention; to force people to buy new computes?

Apple's stock performance and increases in market share despite a global economic downturn are a testament to the fact their products are superior to every other mainstream PC manufacturer; a slick new Apple computer with Mac OS X absolutely trumps all the competition in most areas. Given this I think Apple has a greater than average responsibility to produce good products and to listen to their customers (I can already see the sarcastic comments in response to that…).

They listened and gave FireWire back, now we need them to give us ExpressCard slots back. Welcome back to work Steve, can you get on this for us? :-)