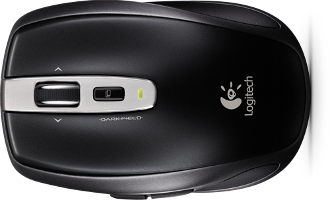 Back in November last year I talked about the spiffy new Logitech Anywhere MX mouse-y substance. Now that I've had one for a month I feel I can do a proper review full of unnecessary language and backstory that nobody cares about.

In a nutshell, it's a brilliant piece of kit!

Firstly, the Anywhere MX is a pleasure to hold despite being relatively petite even when compared lengthways with Apple mouses. The top shell with the buttons are hard plastic and the sides are soft and rubbery which gives really good grip. This whole paragraph sounded so wrong I'm putting an end to it.

There are two customisable buttons on the left hand side and one under the zero friction scroll wheel which can be customised to perform different actions. Unfortunately you do need to install the Logitech Control Centre on the Mac to get customise said buttons, as of yet I haven't tried to see how it works under X on FreeBSD or Linux.

In an ode to the Mighty Mouse that preceded it, the power switch doubles as a protective cover for the laser (did I mention it's a Darkfield mouse that works even on clear glass?!) and as an added special touch there's a hidden compartment for the USB receiver. I'm always losing stuff, so this is a Good Thing®. 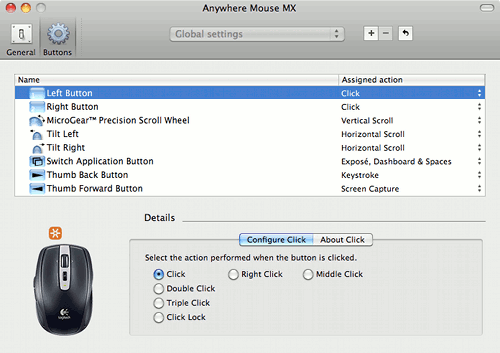 Lisa, In this house we obay the laws of thermodynamics!

Speaking of zero friction scroll wheel, this was the primary reason Steve Gibson from the Security Now podcast/netcast/castcast allegedly stocked up on these mouses (I'm told the plural of computer mouse is mouses not mice, but it still looks weird), and I completely agree with his glowing praise. Can praise glow?

To be frank I was worried having a scroll wheel that didn't have the notched feel like a regular scroll wheel (and an accelerator throttle on certain diesel locomotives) would be clumsy and imprecise to use, but if anything its more precise. Instead of constantly scrolling until you reach what you're interested in, you give it a quick flick with your finger and stop it when you've gone far enough. It's hard to describe, but it really is wonderful.

Only problem is now every time I use someone else's mouse that doesn't have this kind of scroll wheel, I find it unusable, just as I find regular desktop keyboards unusable now that I have a buckling spring model. I desperately need a girlfriend to spend money on.

I don’t miss Bluetooth… one… bit!

Because my humble old MacBook Pro is still my primary production machine, I made a decision several years ago to only use Bluetooth mouses to save one of my scarce USB ports from having an infrared receiver jammed into it. While a fantastic idea in theory, Bluetooth is just as frustrating a technology with mouses as it is for phones; half the time the mouse wouldn't be recognised, and if pairing was successful it'd only last for as long as the machine was turned on, and it'd take a long time.

While the Anywhere MX does come with a little receiver that uses one of my two USB ports, the mouse is consistently detected and even better it's virtually instantaneous! If Bluetooth (or Wireless USB had it come to pass) were designed well, this would be the user experience.

It comes with stuff

Not just stuff, but it comes with a neat little pouch with a zip for carrying it in and two double AA batteries! Since when do electronics that need AA batteries come with them!?

Heavens to Betsy, you get paid by the word?

No, the Bird is the Word. Zing! Anyway the Logitech Anywhere MX is an excellent mouse and well worth every penny. Even though I live in countries that don't use pennies.