I used to put on videos of fish tanks in the background to keep my mind focused when I was studying all through high school, and later when I started working full time. There’s something about the gentle motion of colour with soft, bubbly sounds that put my mind at ease.

But now I can’t stop watching these live Japanese railway cameras! There are entire channels of them on YouTube; right now I’ve been watching Railway Live Camera from Tōkyō.

This shot was taken Wednesday morning: 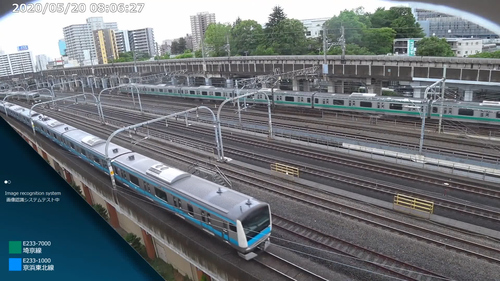 I can’t remember what the train the background is, but the foreground one is for the Tōkyō Metro Tozai line. Clara and I stayed around Kudanshita Station when we went to Tokyo because it was down the road from the Tōkyō University of Technology where AsiaBSDCon was always held. But then we got to exploring, and it became one of our favourite little areas of Tokyo.

It’s funny, Clara and I like the Kansai region way more than Tōkyō, but now I’m feeling nostalgic for there too. I hope the world can shrink again soon, when we’re all ready.

Update: Clara just leaned over my shoulder and told me the green train is the JR Saikyō Line. I think she might be a bigger Japanese train nerd than me.