Apple's Leopard release of Mac OS X has been great in the user interface department, but their bundled X11 implementation is seriously broken which is a crying shame given it worked so well in Tiger. You can read my rambles about fun with X11 and some applications that didn't work on it on my Software Compatibility with Leopard post.

Fortunately the X.org folks and Apple have stepped in and provided updated (albeit unofficial… what does that mean exactly?) XQuartz software which you can install from the command line.

I'm running the latest downloaded version and it seems to have solved most of my Leopard X11 problems including having several X11 icons appearing in the dock, the slow tool movements in The Gimp, Inkscape refusing to boot, weird GTK theme failures and so forth. 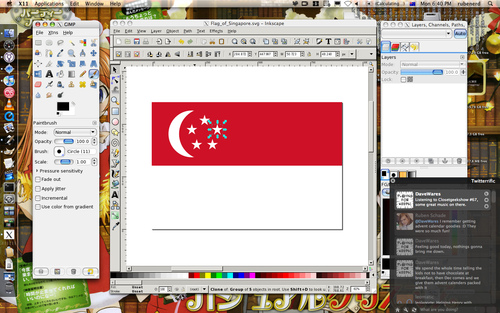 What I want to know is why Apple didn't choose to bundle and distribute this lifesaving X11 update using their Software Update mechanism or with the 10.5.1 update. I can only theorise that because it's targeted mostly at power users who probably already run MacPorts or similar utilities that this was more appropriate, or maybe it has something to do with the fact that this is an "unofficial" release or beta.

As far as I'm concerned the X11 that ships by default with Leopard on disc is seriously broken, and this patch solves the problems. I can't help but wonder though how many people who don't know much about X11 have been put off Leopard because some of their apps are broken.