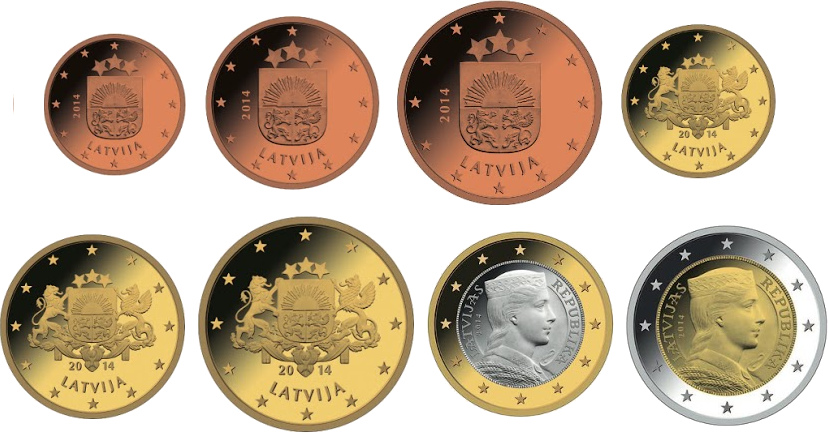 I saw on Wikipedia this morning that Latvia is joining Estonia in adopting the Euro. While I've long since stopped studying economics, I love coins and decided to check them out. They're pretty swish, while still keeping some of the classy elements of the previous mintage. Most fittingly, the 1€ and 2€ coins include The Maiden, arguably one of the most well know symbols of modern Latvia to those of us from the outside.

Which brings me to the country in general. Given its remote location compared to anywhere I grew up, this tiny Baltic nation has had a surprising influence on my family. Our dearest family friends whom Elke and I consider family are Latvian and German. When I was a vexillologically obsessed kid, I wanted a Latvian flag for my room given it did away with the predictable colours most flags used. I had a Baltic map from a National Geographic magazine on my wall for years. To give the markers a break from reading about Australia and Singapore, I wrote my year 10–12 commerce and economics papers on Latvia and Lithuania. Mr. Webb and Mr. Rogers at the AIS are my witnesses!

Since moving back to Sydney, the Latvian influence has only intensified. Half my networking gear now comes from their world–renowned engineers. One of my best friends, the first I made at UTS, and the reason why I'm in Anime@UTS, is a Latvian. When I lived in Earlwood and commuted on the Airport Line, I helped not one but two groups of Latvian tourists at different times, more than any other group of Europeans.

One day Clara and I will go there, and spend us some Latvian Euro with our official tour guide :).