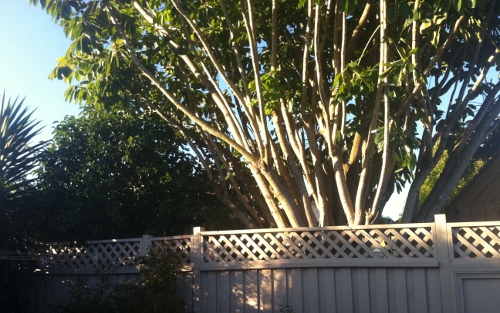 So I was making my way to the espresso machine in the kitchen for a much needed break. I'd been whittling away at a spreadsheet for my father for several hours, and the increasingly complex equations were beginning to make my head spin. Right?

I donned my slippers, slid out of my computer chair, gave an almighty stretch, paused my relaxing music on iTunes (at least, I thought I did, more below) and made my way to the hallway. The late afternoon sun had begun to bathe the house in a warmer coloured light which seemed almost friendly, and reassuring.

I reached for the shelf below the espresso machine, and began pouring the beans from the current bag of Columbian Light Roast into the top of the DeLongi. I could already feel myself waking up and feeling happier just at the smell of the freshly roasted beans.

While the machine was turning itself on, I poured fresh water into the tank, then stared outside into the garden. As far as Australian houses go this half-lot doesn't have much, but still enough for some full bushes and a gigantic old tree on the far side. They were all swaying lazily in the afternoon breeze, themselves turning a warmer shade of green in the same light I saw streaming through the downstairs window before.

A loud, high pressure steam hisssssssss let me know the espresso machine was ready to make the coffee. I tapped the single shot button, motioned my chipped Starbucks mug that friendly barista had given me for my 16th birthday (or was it my 14th?) under the outlet, and watched the goodness stream down.

I wonder if she still worked at that Starbucks? Was that Starbucks even still there? We hadn't gone to it that often in Paragon since the Coffee Bean and Tea Leaf opened. My friend Felix and I would often meet up there after school and dream of all the things we'd be doing after high school. The infocomm. The photography. These newfangled podcasts people were starting to get excited about. Where we'd be living. The accessible artists studio I was designing in my mind for my mum. Budgeting. People we liked. Books. Our IT consultancy plan where we'd dress in tailcoats, bowlers hats and walking canes.

I didn't know how long I was staring at that full cup for, but long enough for the timer on the espresso machine to shut itself off after a certain period of non-use. I shook my head gently, rubbed my eyes, then took the mug.

I was about to trudge back downstairs to the computer room again, but decided instead to walk outside and feel the sun on my back. I could hear the flute music I had been listening to on iTunes downstairs; I was surprised it could carry that far. Maybe I'd left the window open down their. In any case, it was lovely.

I'm a friggen lucky guy, more than I can ever appreciate.