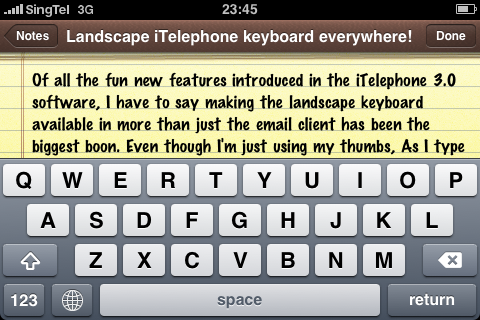 Of all the fun new features introduced in the iTelephone 3.0 software, I have to say making the landscape keyboard available in more than just the email client has been the biggest boon. Even though I'm just using my thumbs, As I type this post in the Notes application I'm noticing just how quickly and accurately I'm able to enter text. It's no full size keyboard I can hammer on with all my fingers at once, but it's good. Very good.

I noticed when Leo Laporte was reviewing the Palm Pre (another smart phone I'm very interested in) he noted that while he made far less errors on the Pre's physical keyboard compared to the iTelephone's touch screen, he was still able to type faster on the iTelephone because the on-the-fly error correction is so well executed. I have a Centro and used to had a Nokia e61i and I can also attest to this.

With this landscape keyboard though, I get the speed from merely touching a flat surface and the smart error correction, but because the keys are wider I'm making less mistakes and am able to type even faster.

While I like Apple products I'm not a fanboy and readily admit that the iTelephone's touch screen keyboard might not be everybody's cup of tea. I encourage you though if you've been holding out for precisely that reason to go down to an Apple shop or reseller and have a play around with the landscape keyboard on either the iTelephone or the iPodlington Touch. You might be surprised.

In the meantime, I just noticed the time in the screenshot there was 23:45. How very trippy.