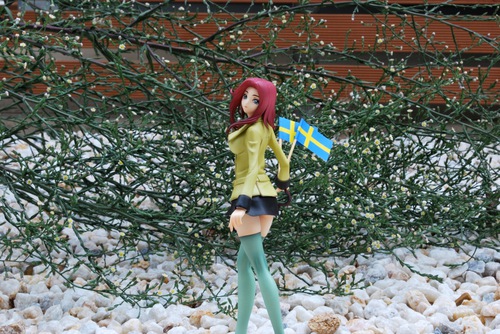 Another post I thought was only going to be one line long, but it turned into a mini saga!

Wishing all the Swedish people of the world a happy National Day! In true cliché fashion I'm eating Swedish meatballs, potatoes and gravy on my IKEA table while listening to Abba, and for lunch I had a dill and smoked salmon sandwich from the… Norwegian bakery down the street. We'll pretend it's Swedish though, but don't tell anyone!

I've always wanted to go to Stockholm; Malaysia Airlines inexplicably has a regular service to it from Kuala Lumpur, not sure about Singapore Airlines. I suppose I should be going with SAS though, right?

WIth the mini-obsession I've had with Sweden for so long, I'm surprised I've only blogged about them once before. That's okay though, because with this post the Sweden tag will have two entries which is double what it had before.

What’s with the photo?

And as for the photo, it's Kallen Stadtfeld from Code Geass holding a bunch of Swedish flags that came with some food from IKEA when I was still in Adelaide. This is my favourite photo of her I took, but she wasn't carrying Swedish flags in that one!

I had no idea why I gave the flags to her to use, perhaps it's because in the story Sweden was annexed into Britannia too and she's showing solidarity. Yeah, that must be it.