A couple of days ago I finally gave in and purchased a copy of VMware Fusion. Having used the demo versions of Parallels Desktop and Fusion on my MacBook Pro I decided VMware's product was much more suited to my needs. Parallels seems to be great for running Windows, but my main use is for FreeBSD and other Unix-like development which Fusion has better native support for (official additions for FreeBSD and Solaris anyone?). And with a special offer of $39.00 for first time beta purchases before the final version came out I figured it was the best choice. I should have taken a PR course at university instead.

So now I have the final, official retail release of VMware Fusion running on my MacBook Pro, and I'm loving it. Having a dual core processor with VT support really kicks some serious virtual arse.

Below is a screenshot of fresh virtual machines running OpenBSD 4.1 sitting at the shell, NetBSD 3.1 with a basic OpenBox window manager session, ReactOS and an installation of Windows 2000 Professional humming along: 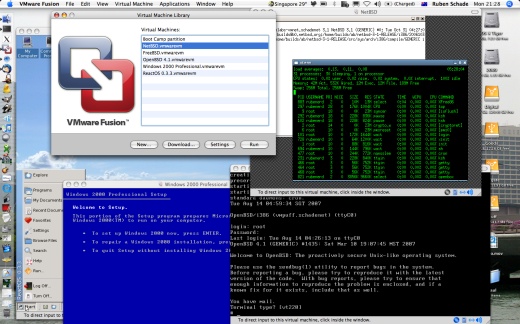 I do admit I do run a purchased, fully licenced copy of Windows 2000 as a virtual machine to run a few apps that don't work so well on Wine, and for testing of my websites using Internet Explorer 6. Windows XP and Vista just add useless features and require more system resources, so 2000 works just nice. Well, as nice as Windows can.

Below is a screenshot of AutoPatcher running under Windows 2000 using the Unity feature of Fusion which makes it look as though Windows applications are running on the Mac OS X desktop. I much prefer to use AutoPatcher than Windows Update because it means I don't have to run Internet Explorer to use it, and I don't call home to Microsoft. 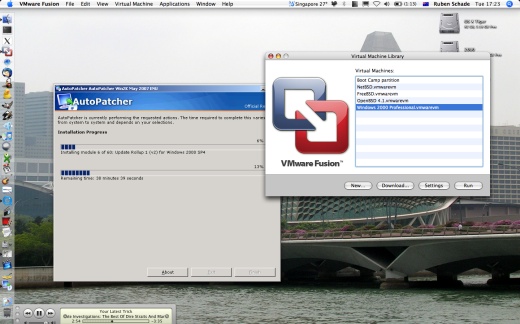 And here it is running in it's own window. I actually think I prefer having it this way: 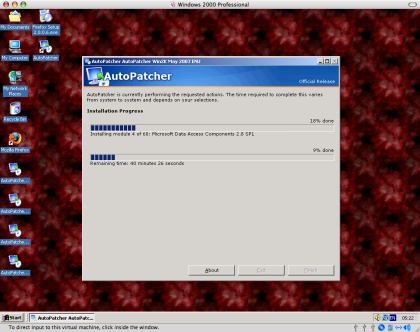 I just love having virtual machines. I can tinker away with really fascinating operating systems and learn so much, without stuffing up anything when I do something wrong. It's great for sand boxing, and it also allows me to run a scaled down FreeBSD machine with just the bare basics so I can study without distractions. Not to mention compiling applications for different platforms… the possibilities are so exciting!