One of the best Jon Stewart clips I have ever seen! In this scene Jon attempts to figure out what George W. Bush's job actually is given his low approval ratings, the fact he's a bit "intellectually challenged" and the fact that Bush himself seems to be unable to explain it himself! 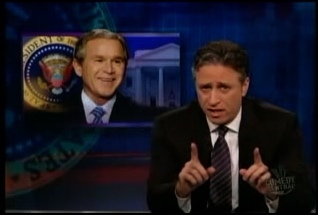 It involves avocados, crows' nests, power cords, deep analysis and a cache of random clips of Bush saying what his job is. Very funny!

You can watch The Daily Show with Jon Stewart in Australia on The Comedy Channel and intermittently on Thursday and Sundays on SBS.

Don't try watching it on SBS in Singapore… because SBS is a transport company not a television network.