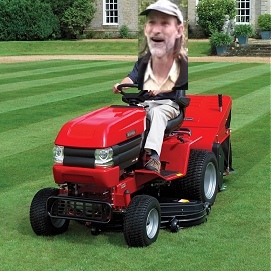 So I'd just woken up after a terrible night's sleep and was making coffee when I tuned into The Whole Wheat Radios on my Mac, and within 20 minutes none other than Jim Kloss came online and started chatting on the mic on air with all of us! He talked about a discussion he'd had with Marian Call about Twitter recently, the music that was coming up (in his own classic and imitable style), along with the progress he was making with his nuclear wheat powered ioniser that can bend space time. Unfortunately so far he can only beam one person at a time with his voice activated command processor, but it's a work in progress.

He also asked a few questions which come to think of it I didn't answer in the collaboration page chat thingy. To answer them here, Elke and I are in Adelaide until November, and while not technically correct in German, when my dad's family immigrated to Australia they started pronouncing our last name as "Shade" for English speakers, so es ist gut so :).

As for the image above, this was a photo I took of Jim Kloss himself mowing the perfect green lawns that adorn the surroundings of the Wheat Palace where the independent music Whole Wheat Radio headquarters are located. You can tell it's not an extremely crappy Photoshop job because I actually did it in The Gimp. I'd be hilarious if I could write and deliver good jokes.