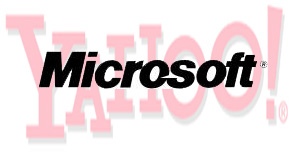 Jeremy Zawodny, one of the tech bloggers I respect the most (and one of the first people I added to my Bloglines account all those years ago) has posted a list of possible scenarios and outcomes of a Microsoft Yahoo merger. I'll try not to blatantly plagiarise his material, but suffice to say he says the following are possible:

I know what is good for their business probably doesn't correlate with the outcomes I'd like to see, but if I were given the chance to choose the outcomes I'd prefer, I'd arrange them in this order:

Yahoo is in trouble and does need help with their core search and advertising businesses, but I look at their track record on acquisitions and how much respect I see they still have with most people, and I can't help but think a merger with Microsoft would do them any good.

Microsoft desperately wants to whip Google and they see Yahoo as the easiest way to do it, given their failure rate and return on investment on all their online ventures, but what's in it for Yahoo? A possible clash of business cultures? Disillusioned workers who don't want to work for the evil empire? The dropping of services?

Personally I see Yahoo as more of a diversified internet services company, not a services company that's dominated by search with other services on the side such as Google. This is why I'm very concerned with people who simply cite Yahoo's slipping market share for search and conclude that they're failing. Flickr for example is one of the most respected, if not the most respected, photo storage and sharing sites, and I don't know of any nerd or heavy computer user who doesn't at least have a del.icio.us account. Anyway with Jeremy's list as a starting point I've compiled my own short list of possible outcomes:

Google and Yahoo enter a partnership
Either as a delay tactic against Microsoft, or using it as a "white horse defense" against a hostile takeover.
eBay and Yahoo merge
Skype and auctions somehow integrated with search and existing services such as Flickr could be quite interesting, and their business cultures are far more compatible. eBay does has far less cash though, it would have to be a merger not a takeover.
Yahoo is purchased by News Corporation
Replaces Google as the default search on MySpace. Shudder!
Yahoo is purchased by Time Warner
I’ve always said merging Time Warner with an IT company would be a brilliant idea, they really should do it one of these days. Heck, it’s not as if they’ve ever tried before.
Yahoo’s goes bust
Their share price and market share continues to slide, and they eventually go into Chapter 11 Microsoft and Google swirl like vultures to pick up the pieces
An angel investor
The Flying Spaghetti Monster swoops down with his noodley appendage and provides investment just in the nick of time.