Last Friday I bought a OEM 2-bay external RAID enclosure as a silly present. Jaycar’s discounted price was cheaper than eBay, and I needed a quick way to expand my home server.

I don’t trust external USB enclosures for critical data; their controllers are usually bargain basement and can behave in unexpected ways, as we’ll see in a moment. But for home server experiments, or if you use its basic default RAID, they’re probably fine… or as fine as any data can be without ZFS. Which is to say, I hope it’s not important! 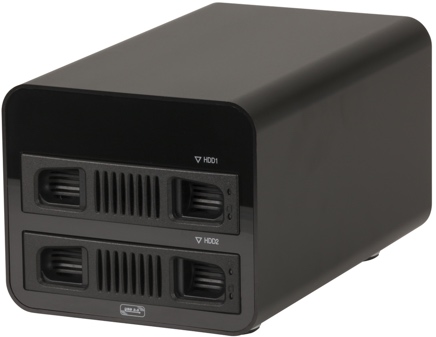 The enclosure supports your usual RAID 0, RAID 1, and spanning, but more importantly it could work as a JBOD with individual drives exposed to the OS. If you use ZFS, which you should, you always want it managing your RAID.

This was dmesg once plugging it in:

The manufacturer’s website lists the JMS56x as a “low power consumption and high performance USB 3.0 to SATA 6.0Gbps (bit per second) Bridge controller” with Windows Hardware Certification and upgradeable firmware. Someone with more hardware knowledge could read the brief and glean more detail.

So I plugged in two drives I had spare.

Keen-eyed sysadmins may already see a wrinkle, but at that stage I thought so far so good. I can see a da1 and da2, so there are two drives. Time to configure with ZFS, and give them a spin. Ah man, that pun was on point.

At a high level you can configure a ZFS mirror like this:

This is ill advised, because these identifiers may change, and you have no way to map them to the physical world. The conventional wisdom is to use labels, either with glabel, or when making a partition table with GPT as below:

Here’s where I make a dirty confession: I skip this for personal drives. FreeBSD automatically creates references for drives by their serial number, so you can use them immediately as such:

But here’s where things got interesting with this enclosure. When I went to check that folder, and again with glabel status, only da1 appeared. I checked dmesg again, and sure enough:

Sad trombone! I made the mistake back in the day when using a glabel that was too long, and it truncated them to be the same. Then overlaid GELI encryption and overwrote the label. Either way, this ruled out my lazy shortcut.

Fortunately, I could use the above gpart steps to create unique identifiers based on their serial numbers. Then I reference them from the gpt folder:

And now it’s ready to go. One thing I didn’t mention was the step involving setting up GELI for encryption, which you’d do before creating your zpool. This won’t have any important or confidential data, but it makes sending drives back under warranty much easier knowing the data on it is electronic noise.