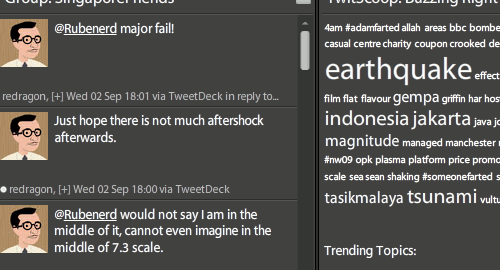 The amazing power of Twitter. In the last hour my very close friend Felix Tanjono reported that he was feeling severe tremors in his house in Jakarta. Within minutes the main trending topic on Twitter was "earthquake", and after a short time Australia's ABC News started reporting the quake:

Indonesia’s seismology agency says it has recorded a powerful 7.3 earthquake near the main island of Java

What's farcical is half an hour later on their flagship 6pm bulletins neither Channel 7 or Channel 9 here in Adelaide had a story on the quake, not even a "breaking news" update or mention whatsoever. Some of the stories they felt were more important? A human interest story on an American family that now has over a dozen children. The rides for the Royal Adelaide Show. An entire day's worth of sporting news. All this half an hour after the Australian ABC had managed to report it.

I know I'm used to getting my news near instantly with Twitter now and my expectations are much higher, but this is still pretty bad. A 7+ quake is huge.

UPDATE: Channel 7 briefly reported the quake with a one line report at 18:28, over 45 minutes after the ABC.