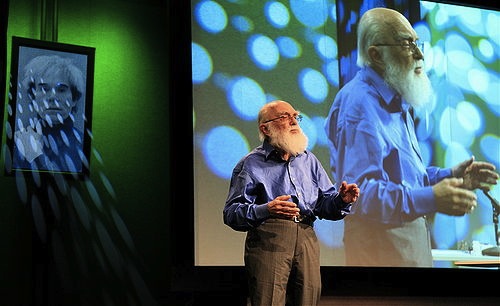 There are few people I have more respect and time for than James Randi. Nobody else has done more to expose conspiracy theories, fraud science, the paranormal, astrology and the supernatural with rationality, common sense, critical thinking, reason and perhaps most importantly, humour and civility.

Well, here goes. I really resent the term, but I use it because it’s recognized and accepted.

Less than a week ago it wasn't common knowledge, but unless you haven't read the hundreds of news reports by now, Mr Randi recently escaped the closed on his James Randi Educational Foundation website. One can only imagine how long he was staring at that blinking cursor on his computer screen, or the blank sheet of paper, and all the hundreds of other times throughout his life when he came close to but couldn't.

He explained his decision relative to perceived attitudes which I find heartening.

Gradually, the general attitude that I’d perceived around me began to change, and presently I find that there has emerged a distinctly healthy acceptance of different social styles of living — except, of course, in cultures that live in constant and abject fear of divine retribution for infractions found in the various Holy Books…

In another two decades, I’m confident that young people will find themselves in a vastly improved atmosphere of acceptance.

We can only hope sir. In the meantime, my warmest congratulations. I wish I could say I respect you even more now than I did before, but you already set the bar pretty damn high. Plus — and I don't quite know how to put it — I don't care. Your sexuality has never been a factor in my thoughts about you and your work, and I view you no differently today as I did last week. In no small cliché way, you were one of my heroes before and you still are, no more, no less.