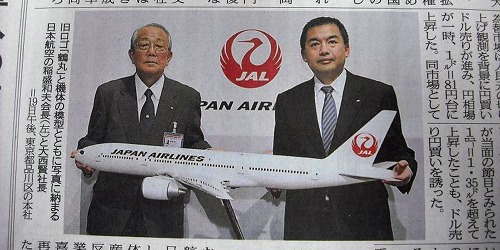 As a formerly obsessed aviation nut and a logo nerd, I felt compelled to comment on JALs new livery, albeit a month late. Hey, I don't exactly keep up to date with press releases, except if its from a company with a bitten apple for a logo.

From their press release

You can read the whole thing in English, and I'm assuming Japanese, somewhere on that page.

The JAL Group (JAL) today will adopt a new corporate policy and announced its decision to change its logo from April 1, 2011; symbolizing a fresh start for the airline group with its strengthened commitment to society and reinvigorated determination of the management and all employees.

The symbol of the crane has come to be associated with the nation’s distinct hallmarks of pristine quality and reliability. For customers, JAL is determined to safeguard these values of the Japanese culture and to continue reflecting its quintessential hospitality from the heart in the airline’s authentic services – a promise that is now embodied in the Group’s new corporate policy unveiled today.

First, it must be said, few airlines have changed their liveries as much as JAL has over the last twenty years. Being a product of the 1980s myself, I can count no less than three changes in the time I've been alive. When one considers all the work and cost involved in doing this, that is not an insignificant number!

By comparison, QANTAS have changed theirs once from the orange cheatlines and the kangaroo with wings (there's a Red Bull joke in there somewhere) to the plain white and red scheme we see now. There was a minor tweak recently when they introduced an awful new font that looked like a preschooler was given permission to scrawl on the forward fuselage and the kangaroo was turned from a sleek, fast moving creature into one with an extremely serious weight problem, but overall the scheme has remained basically the same.

Singapore Airlines, the world's greatest IMHO, has barely changed at all save for a minor tweak of the cheatlines and slightly larger logos and lettering recently.

Wasn’t this about JAL?

I'm getting to that, geez! Some people have absolutely no patience, tact or either of the above. Tact would make a great name for wall adhesive, I'm just saying. 3M probably already has it trademarked. Sneaky Minnesotans.

For one thing I've been a huge fan of the retrojets; the aircraft that have been painted out by their operators in recent years with paintjobs from the 1950s. They look absolutely amazing. JAL's new livery is actually based on their previous, previous, previous design, right down to the reintroduction of the crane logo and even the original font! Right there, they've earned some design cred with me.

It was also desperately needed. Their latest design with the plain red rising sun tail was duller than the design of Rubenerd.com. It lacked any of the character of the crane, and its great to see it back in this latest iteration.

Two things. First, I didn't think it was possible to top the previous design in dullness, but they did it. As a fan of Apple, Braun and IKEA, I'm all for minimalism, but I also don't think you have to sacrifice all detail to achieve it. Minimalism != nothing.

Secondly, to me the font for the forward fuselage just doesn't look right. In the previous design upon which this livery was based, thick black and red cheatlines along the windows balanced the letters out, but by themselves on a plain white background they look really out of place. Its stark. Its cold.

So what would you do?

First, I'd fly ANA instead because they're solvent and I've been told the flight attendants are super cute. Not that you just read that.

Secondly, JAL have a strategic asset that I think is being completely wasted. From Wikipedia, emphasis added by me:

JAS was famous for its variety of aircraft liveries; Amy Chavez of The Japan Times described the rainbow liveries as “abstract.” Many of its color schemes in the 1990s were designed by film director Akira Kurosawa.

JAS, aside from sounding very much like JAL and nothing like ANA, had in my opinion one of the most awesome liveries in the world. They were super colourful, but still looked classy! And they didn't just have one, some were rainbow colours, some were predominantly teal… I could go on.

So here's what I propose. Bring them back! Put the epic JAL crane on the vertical stabiliser, but keep the colourful schemes! That would represent optimism to your customers. For saving your company, all I'd ask for are some regular business class tickets between Narita and Singapore, and Singapore to Sydney.

Credits to Japan Airlines for the press release graphic, AusLexJapan on Photobucket for the Kouhei14915 on Wikimedia Commons for the JAS photo.