At first spam bots harvested email addresses from search engine indexes of web pages, then when the concept of posting comment on blogs started reaching critical mass spam bots started pumping spam through those… I can guarantee it won't be long before most of the traffic on the internet will be junk spam messages, not just the majority of email.

ASIDE: The cynic in me says that most of the material on the internet is pretty much junk anyway, and the self depreciating side of me says that this website in particular is not doing much to lift these seemingly low standards!

It seems to me though that blog spam in itself is evolving though. I used the word "though" twice in that sentence. When previously they mostly consisted of masses of links to get more Google juice, now they seem to be latching on web feeds that blog software exports and creating more and more junk blogs with this plagiarised information. Some of them try to pass themselves off as legitimate by creating faux introductions that go along the lines of "Hey I found this blog entry and it's really interesting, here's a summary!".

I noticed this phenomenon (I've never been able to say that word without ending up saying phenomenon -menon -menon… -menon) recently when I started getting hits from this somewhat creepy blog called "Blogslog Golf" that just posted a large chunk from my article about Boohoo paraphernalia: 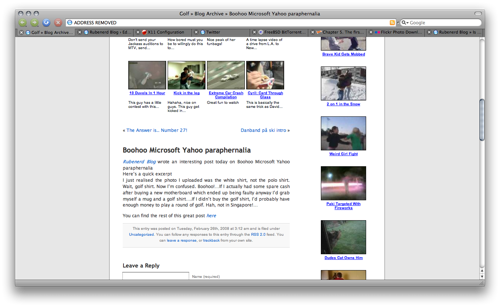 I can only theorise they're doing this to get trackback and increase their rankings on Google, or as a way to add content en masse to their site to make it appear more legitimate for advertising. It fills me with so much anger: I mean, why didn't I think of that? :P