In light of the proposed IPv6 Day on the 8th of June, I've been accused of being too short sighted with my scepticism for the standard. I'll discuss my severe privacy reservations about it tomorrow, for now I'm whinging about how we're being sold it.

First of all, let me acknowledge that despite all the alarmist rhetoric which I usually take with a heavy pinch of salt (scaring people sells more newspapers), the pool of available address for IPv4 is running low. Take note of my wording, there are still huge blocks of unused addresses reserved for the firms and universities that were in cozy enough relationships to get them, many of which are using NAT now anyway, go figure!

I've read people demanding these companies and organisations surrender these addresses they're not using, but they really don't have any legal standing to do so, and I don't really see how that would do anything other than delay the inevitable. Technically it would only provide short to medium term relief, and from a business perspective such organisations spent a small fortune for them and likely see holding them as a competitive advantage, so they wouldn't be keen on surrendering them.

So we're back at square one. The networking industry has been nothing short of Nostradamean in the accuracy of their predictions of when exactly we'd be running out of addresses which hasn't helped their cause, but the final result is inevitable.

How we’re being sold it

Now that I've got all that out of the way, I can discuss my first gripe with IPv6, or more accurately how we're being sold it. IPv6 has some nice features like IPSec being an integral part, but take a look at any article about the standard and its existence is justified by IPv4's limited address space. Appreciate that for a second, we're not being sold on IPv6's merits, but rather on the comparative crappiness of something we're using now.

While we're talking about doomsday and computers, here's an obligatory picture of the creator of the universe with one. 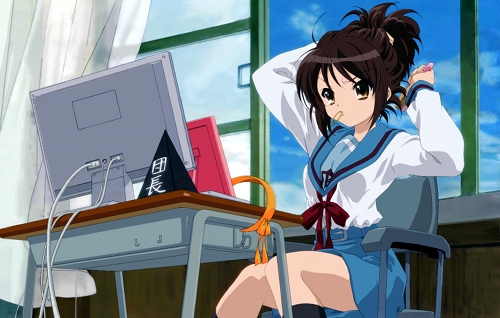 I don't have the desire to learn the intimate details of dual stack implementations to cope with IPv4 and IPv6, but I've seen enough complicated flow charts to know that deploying IPv6 and IPv4 concurrently is messy and involves some pretty sophisticated routing gymnastics.

Yes its better than IPv4 (multicasting as standard sounds like it'll be to broadcasting what switches were to hubs! Hehe, remember hubs? I had a 5 port hub that for some reason port 3 didn't work on) but my argument, and some of the other sceptics on various newsgroups right now, is if we're going to invest all this time and money implementing this essentially from scratch, why not take the opportunity to implement something completely new and fundamentally better? Why compromise at all if they're going to be incompatible anyway?

The answer, in perhaps the most delicious case of irony I've encountered in a long time, is because IPv6 more established than anything else, and there's more support for it in major operating systems. Wait, hold on a second… aren't they the arguments people use to claim we should stick to IPv4?

But this standard is all we have!

Potentially worse still, because there are so many addresses, that sense of urgency won't be realistically felt again, and we'll be stuck with it. Whoopie.

I tell you what, from a security and privacy perspective, intelligence organisations, the courts, black hats and behavioural marketers could not have played this any better. All that needs to happen now is for Hollywood to release a Y2Kish film and Norton to release some overpriced compliance checking software to cash in on people's fears like they did in 1999, and we'll be set! :D

I hope Google's IPv6 trial on the 8th of June goes well, because it will ensure the future viability of the net itself. That doesn't mean I'm looking forward to the future though.

My jittery paranoia will be reserved for tomorrow's post ;).