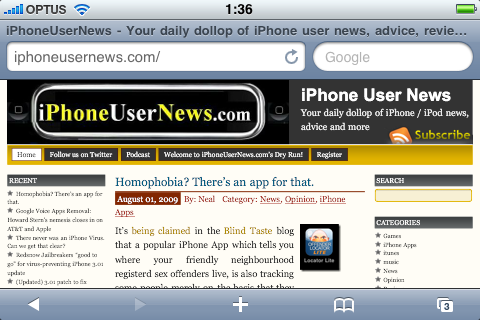 After hearing for years about how blogging was going to revolutionise the way we read and publish information, it seems thesedays most blogs dealing with specific technologies have consolidated into "megasites" run by dozens of people. Nothing wrong with that per se, but it means if most folks want to read about news, reviews and opinions on iPhones for example they hit the same few sites that rehash the same material as each other and that's it.

With this in mind I present to you my dear reader iPhoneUserNews which if you can't figure out what it's about from the title I find your comprehension skills both scary and fascinating at the same time. It's run and managed by the same Neal behind the IntoYourHead show from the Emerald Isle. At least that's where he claims to be, he could be posting messages from a base in Antarctica or one of Saturn's moons for all I know. Apparently he likes frigidly cold climates.

If you're fed up with reading the same stuff about everybody's favourite phone from the same few sites (you know the ones of which I speak) you may want to check it out. I was paid off several billion Euros to promote this site, but that shouldn't in any way put you off anything I wrote here about it. You can also follow along on The Twitters.

Thank you, and good morning. Or whatever time of day it happens to be for you and the internet device upon which you're reading this. I say that because the time on your internet device may be incorrect and you may assume the time is different. I'm clever aren't I? Don't answer that.